It would later return as one of the villains who would serve as a member of Asmodeus' army. The Griffon Minosaur would survive long enough to see its' master’s plans seemingly come to fruition until Touma Kamiyama had managed to help Shotaro himself regain his passion for drawing out superheroes which had, in turn, revived all of the Kamen Riders and the Super Sentai teams back into existence. Ultimately, the entire army itself would be wiped out by the full and combined might of Kamen Rider Saber as well as his fellow swordsmen and the Zenkaigers along with Twokaizer while being supported by each and every one of the Kamen Riders that came before Kamen Rider Saber as well as each and every one of the Sentai Red rangers who were the leaders of their respective Sentai teams that came before the Zenkaigers.

Like all Minosaurs, due to being created from pure negative emotion based upon a singular desire, the Griffon Minosaur was only capable of saying "treasure" but spoke almost exclusively in roars and growls. Despite this, it showed the capacity to work with its allies and was very loyal to both Kleon and Ganima. 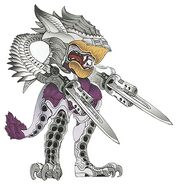