Grid Battleforce is an non-government organization created to use Morph-X as an energy source and to protect the Morphin Grid from Evox. Although the organization has offices worldwide, its flagship headquarters is based in Coral Harbor, which doubles as the base of the Grid Battleforce Rangers.

Prior to the series

The original version of the organization was run by a handful of workers headed by Commander Shaw and Nate Silva. With them and their small team of researchers and scientists, they discovered a substance known as Morph-X surrounding the grid. They learnt over time that they could use the past Rangers' Morphers and weapons in order to gain access to the Morphin Grid and harness its power. Upon realising its potential as a clean and renewable alternative energy source, they mined the power of the Grid and refined it into a green chemical dubbed Morph-X, thus abandoning the use of fossil fuels altogether. Grid Battleforce was founded in order to harvest, refine, house, control, and protect this precious energy source.

Several years before the series, Nate discovered the Venjix Virus inside a Cell Shift Morpher and accidentally fuses it with snake DNA, inadvertently reviving the dormant virus as Evox.

The Beast Morphers Rangers were formed by Commander Shaw in order to act as the protectors of the Morph-X. The original three cadets were going to be Blaze, General Shaw's son Ravi, and Ravi's secret girlfriend Roxy. However, on the day that the group was supposed to be given their Ranger powers, a cobra-like being infected the Morph-X and created two evil avatars which put their real counterparts into a state of suspended animation. Ravi was saved by the mayor's son Devon and a laundry girl, Zoey. With Nate's help, Ravi, Devon and Zoey morphed to become Power Rangers and defeated and transported the new avatars and their master into the Cyber Dimension.

While in the Cyber Dimension, the Cybervillains met its ruler, Scrozzle, who originally planned on killing them but was recruited by Evox. With his technology, they began sending monsters called as Robotrons and giant monsters called Gigadrones to Earth to seize the Morphing Grid. With Evox lacking the Morph-X needed to escape the dimension, the avatars, by virtue of being connected to the Morphing Grid, can morph into evil Power Rangers, and can freely escape the dimension, thus becoming his frontline generals. Luckily, Nate and the other Grid Battleforce employees had created three special Zords piloted by humanoid robots known as Beast Bots for just such an occasion.

During the battle with Slicerdrone, Devon was able to disable it with a stab through the face and Grid Battleforce were able to capture it.

With the permission of General Burke, Commander Shaw's superior, they transported it using the Chopper Zord to a secure hangar where they squired data that would lead to the creation of the Beast-X Megazord which was first used when Roxy's avatar and Meltatron freed Slicerdrone from the hangar and teamed-up with Meltadrone to try and kill the Rangers, although this failed.

Eventually, Evox and his henchmen built a massive gateway to Earth known as the Cybergate, so Evox can enter into a new robotic body built from pieces that Scrozzle acquired over the last few battles. The villains captured a truckload of Morph-X using the Tronics and Vacuutron and captured Nate so that he cannot interfere. However, he managed to free himself and his interfering with the transfer lead to the creation of Steel, the new Beast Bot and Nate's brother of sorts. Together, they destroyed Vacuutron whilst the Beast-X Megazord made short work of Vacuudrone.

During the events of the first season, Grid Battleforce was only actually ever invaded once by Clonetron, who posed as Nate and then Steel before eventually being destroyed.

After the death of Tubatron, Nate and Zoey work at interviewing a candidate named Megan to see if she is worthy of being Nate’s lab assistant. Nate mentions to Megan that he is working on building new equipment such as the new Cheetah Claws for Devon. Megan responds with criticism when she sees Ben and Betty testing the Cheetah Claws in front of her, leaving Nate and Zoey hesitant to hire her for the job. Megan leaves and she vows to become Nate’s new lab assistant when she sees him and Zoey become hesitant about her as more candidates enter the lab for interviews. Eventually, wanting the position of lab assistant desperately, Megan happened to discover Nate and Zoey at a theatre and recorded them on her phone. She later confronted Zoey and tried to blackmail her. She later sabotaged the Cheetah Claws as revenge but this was later undone and was used to kill Tubatron 2.0. Megan was then fired by Commander Shaw for sabotage, blackmail, lying and deception.

Scrozzle made an attempt to brainwash the Rangers into the characters they were dressed up as to prevent them from interfering while he and Spiketron stole a truck of Morph-X. In spite of his successful brainwashing, Devon was able to undo the mind control and they stopped both Spiketron and Spikedrone.

However, shortly after the first encounter with Scrozzle's first creation, Vargoyle, Grid Battleforce entered a crisis since the Memory Pulsator planted by the villains in the city was activated, which allowed Blaze and Roxy to enter the base as their human counterparts since everyone only remembered events before the series proper. Although Vargoyle was killed by Devon's Beast-X Cannon and Steel smashed the Memory Pulsators, the avatars managed to escape with some Mega Transporters.

Not long after, implied to be the next day, the Rangers were sent to escort a van shipment of Mega Transporters. However, the villains were after them and Scrozzle deployed a Gigadrone to distract four of the Rangers whilst Roxy took on Ravi. Although Roxy is killed by Ravi later on, Blaze managed to escape with some Mega Transporters which they soon used to transport an entire Morph-X Tower into the Cyber Dimension, in order to get enough Morph-X to allow Evox enter into a physical form.

Grid Battleforce decided to send the Rangers to the Cyber Dimension, having gotten the dimensional coordinates when Devon was kidnapped and forced into the dimension, and they formed the new Beast-X Ultrazord. The new Ultrazord was strong enough to destroy an army of Gigadrones but it was destroyed by an energy blast from Evox in his new physical form. In spite of the loss of all but the Racer Zord, the destruction of Blaze and his Megazord within the Morph-X Tower led to the dimension being wiped out and Evox seemingly killed with no one aware that he now resided within Mayor Adam Daniels. The only villain still at large was Scrozzle, who managed to teleport himself and the Robotron-Maker out of the dimension after Nate shot him in the back with his Striker Morpher.

Around Christmas time, Scrozzle decided to attack the city with an army of Tronics and the new Robotron, Infernotron, as revenge for what they did to the Cyber Dimension. Although it failed and the Robotron was destroyed, he managed to trap the Rangers in Christmas ornaments and later deployed Infernodrone to drain more Morph-X. However, the Racer Zord (piloted by Cruise with the other two Zords piloted by Jax and Smash) managed to destroy the Gigadrone and seemingly kill Scrozzle and the Rangers were freed from the ornaments. Having seemingly seen the last of Evox and his forces, Grid Battleforce became inert like it used to be and the Rangers returned to thier ordinary lives.

In the year in between Seasons 1 and 2, Grid Battleforce had remained vigilant but slightly more lax with the Rangers, which they still training their marksmanship and swordplay, but none of it seeming to matter anymore. However, it was soon revealed during a camping trip that Scrozzle had survived and Evox was back. Although they managed to kill Drilltron 2.0 and destroy Drilldrone 2.0, Scrozzle escaped with the Morph-X spillage and the organization once again became defensive.

After Trappertron captured Blaze and Roxy in a cage, Scrozzle scanned them and created robotic duplicates of their avatar forms (now called Robo-Roxy and Robo-Blaze). Although they were finished off by the Beast-X Ultra Blaster, the Beast-X Blasters and the Striker Morphers, Scozzle revealed that he could continue putting them into new bodies as many times as Evox wished.

Keytron was was sent into Grid Battleforce as a human named Pierre to destroy the base with explosive paint, but he failed.

Eventually, Controlatron was able to fully take control of Nate and brought him to the Crystal Dimension to create a program which takes control of a special new Zord Mayor Daniels/Evox knew was being made (since he was funding it). Although Nate was freed and both Controlatron and Controladrone were destroyed, the program remained intact.

A few days later, General Burke and Mayor Daniels/Evox revealed to Grid Battleforce that they had created a new Zord called the Beast-X King Zord. This severely annoyed Commander Shaw, since she considered it a liability to their safety due to Evox and the Rangers were equally surprised to find that Megan was the head designer on the new Zord, having been hired by Burke due to her striking intelligence. She showed off her creation to the Rangers, Mayor Daniels/Evox, Commander Shaw, and General Burke, but Robo-Roxy and Robo-Blaze were able to use an Evox virus-infused dart to take control over it, which panicked the Grid Battleforce top brass. Eventually, however, they managed to bring it back under their control with the Beast-X King Ultra Bow, at which point Devon used its Battle Mode to destroy Robo-Blaze and his rebuilt Megazord. Commander Shaw later rehired Megan and General Burke gave them permission to use the new Zord in their battles.

In an attempt to separate Mayor Daniels from Evox, Devon along with Ben & Betty access the Grid Battleforce's vault which contains all the Morphers and weapons from other Power Rangers to obtain the Split Emitters.

A year after Evox/Venjix permanent destruction, Grid Battleforce no longer use Morph-X as source of sustainable energy, instead relying on Wind and Solar power as an energy source. Commander Shaw is promoted to General, leaving Devon as the new Commander of Grid Battleforce. 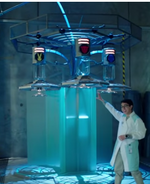 Ranger Vault (Ene-tan in the corner)

Research Room
Add a photo to this gallery

The Special-Ops Hangar is a secret Hangar located in the woods to the west of Coral Harbor used by General Burke. He gives the Rangers, Nate and Commander Shaw access to use it for their needs. It was temporarily used to house Slicerdrone but it was destroyed when the Gigadrone was freed by Roxy's avatar and Meltatron, blasting apart the opening and caving in the roof. It only appears as the titular primary setting of the episode Hangar Heist.

Slicerdrone inside the Hangar
Add a photo to this gallery

Retrieved from "https://powerrangers.fandom.com/wiki/Grid_Battleforce?oldid=992194"
Community content is available under CC-BY-SA unless otherwise noted.