RangerWiki
Register
Don't have an account?
Sign In
Advertisement
in: Unsourced quotes, Disambiguation pages, Power Rangers with more than one identity

The Green Mighty Morphin Ranger could refer to:

Tom Oliver, a clone of Tommy and the second Green Mighty Morphin Ranger 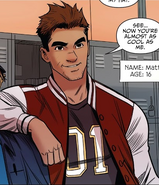 In an episode of the YouTube web series Super Power Beat Down, which features actor Jason David Frank as Tommy, the Green Ranger's suit was given a one-off revamped look, featuring a more modernized suit design in a much darker shade of green and armed with the Sword of Darkness and the Dragon Dagger. This version of the Green Ranger would be made into a playable character in Power Rangers Legacy Wars, dubbed the Green Ranger V2 suit.

In its initial appearance, the helmet's color scheme resembled the original suit's green, though summoning the Dragon Dagger turned the helmet into a darker green while silver trims appeared on the helmet.

In Power Rangers Legacy Wars - Street Fighter Showdown, Tommy explains his new Ranger form as an upgraded version made by Ninjor when he made the Crimson Hawk Power Coin.

This suit would be used by Matthew Cook in Boom! Studios' Power Rangers comics.

The MMPR Green Ranger Key is one of Tommy's personal ranger keys. This key along with the other 14 Official Sixth Ranger Keys are seen lining the Command Center's interior walls. This key is mainly used by Orion (Super Megaforce Silver) who uses it to fight as the Green Mighty Morphin Power Ranger.

The Mighty Morphin Green Ninja Power Star is a special Ninja Power Star that bears the likeness of the Green Ranger and is marked with the kanji for "green". This will be a part of the upcoming Super Ninja Steel toyline and it's currently unknown if it will have a in-show appearance.