"Rest easy, Buredoran of the Comet. You said we just had enough power to destroy the Heaven Tower, didn't you? Then, all that remains is to drain this worthless planet of all life upon it."
―Mons Drake's first words when being told by Brajira that he should remain on his guard since it had caused problems for other villains in the past having seen Dereputa destroy the Heaven Tower.[src]

"Dereputa...Targate...The best and brightest of our glorious Warstar army...all lost to those ridiculous Gosei Angels."
―Mons Drake after he evolved into his second and final form.[src]

"Pathetic Earthlings! Hear my words! I am Mons Drake of the Planet, the High Commander of the Universal Annihilation Army Warstar! You have twenty four hours remaining... before I eradicate all life on this planet."
―Mons Drake's message to the people of Earth.[src]

"The Guardian Angels? What do you riffraff want with me? I plan to eradicate all life on this planet."
―Mons Drake when confronted by the Goseigers.[src]

"Buredoran! Proceed with the plan! Soon, the Earth will meet it's end!"
―Mons Drake when he enlarged.[src]

"I am Mons Drake of the Planet! I AM Warstar! How could I fall... to creatures like these?!"
―Mons Drake's final words before his death.[src]

During the invasion of another planet, Mons Drake saw Dereputa's fighting skills and was impressed. Confronting him, he offers to make him his right hand man, which Dereputa gladly accepts and has been loyal to him ever since to the point that he aids him every time that Mons Drake uses the Gravity Fall ritual.

Before invading the Earth, Mons Drake realized that the Gosei Angels would hinder their goals, so he tasks Dereputa to destroy the Heaven's Tower in a preemptive strike. While Dereputa succeeded, Mons Drake didn't count on five Gosei Angels in training who were still on Earth when it happened, and thus he tries to have his forces deal with them.

Eventually, after 11 onslaughts ended up in failure, causing him to grow tired of the Goseigers' interference (with the last one resulting in the death of his top soldiers: Yokubabanger), Mons Drake performs the Gravity Fall to make the Moon collide with Earth. However, it is stopped by the Goseigers.

Following the supposed death of Dereputa (who survived but Mons Drake and Buredoran were unaware), Mons Drake orders Buredoran to use Powereddark to avenge him. When that fails, he summons another one of his top soldiers, Targate to eliminate the Goseigers so he could replace Dereputa, but even Targate fell to them.

Outraged with the death of both Dereputa and Targate, Mons Drake evolves into a secret form and attempts another plan by transferring Earth's oxygen into the Indevader and have Buredoran crash it into the Earth to incinerate all life on Earth. However, after a fierce and lengthy battle, he grows giant and overwhelms Gosei Great but is blasted into the Indevader by Hyper Gosei Great and consumed in the resulting explosion caused by the Hyper Headder Strike, killing him.

Despite his death, Warstar was still at large and would soon be succeeded as leader by Gyōten'ō of the Supernova a while later, but even he fails due to the powers of Gosei Wonder. Following that, the threat of Warstar as an entity was over for good.

His spirit later appears to Brajira, futilely trying to attack him before being cast away. It seems that Mons Drake found out of his ulterior motives even though he never found out when he was still alive.

He is mysteriously revived in Kaizoku Sentai Gokaiger vs. Uchuu Keiji Gavan. He is seen fighting Captain Marvelous and Ahim as the Skick Goseigers. He shoots them with a blast from his ax. Marvelous sees a door behind him, so Ahim covers him with a windrush card. After saving Gavan, he is ultimately destroyed by the GokaiGalleon Buster's Special Charge.

He revives again in Kamen Rider × Super Sentai: Super Hero Taisen as a member of Dai-Zangyack. He was only seen when Marvelous orders them to hunt down Kamen Rider OOO, Birth, and ProtoType, with Dereputa, Brajira, Brajira's clones, and the Dark Headers. He was last spotted with Dereputa and Nanoma-Gatari trying to chase Hina-chan, until Daiki Kaito shows up and blasts them. Unfortunately, Great King Mons Drake, along with the other Goseiger villains were never spotted in the final battle so it is unknown if they were defeated or not.

Mons Drake is an alien who is merciless and remorseless in destroying planets. While his Gravity Fall ceremony is his favorite way of destroying planets, he would prefer to send a Universal Insect Monster to do it in it's own twisted way. Despite being a warmonger, he is usually calm and patient, as it took 10 initial onslaughts before he grew tired of the failures. He at least respects those that are close to them like Dereputa, as his supposed death devastates him to the point where he becomes more abusive and unhinged, striking at Buredoran for any reason as shown in Epic 13. When Targate is killed off, Mons Drake completely loses his cool and soon reveals his secret form to Buredoran before finding a plan to end the interference of the Goseigers forever. He doesn't mind when Universal Insect Monsters act on their own without consulting him, as shown with Fandaho of Nonsense and Kurasuniigo of 5000°C as long as they act for the Warstar cause.

His signature attacks are the Planet Bullet (惑星弾, Wakusei Dan) (summoning a series of energy planets around him to bombard his enemies in an attack strong enough to take down all five Goseigers), the Syzygial Bullet (惑星直列弾, Wakusei Chokuretsu Dan), and his most powerful attack is the Gravity Fall (引力落とし, Inryoku Otoshi) ceremony where he uses the dark matter in his body to cause a nearby satellite to impact on the planet in which he is currently located with enough force to annihilate it. However, he doesn't always use it, presumably because it's very draining, and he even tells Dereputa that it hasn't been used in a while. He can shoot golden energy blast and lightning from his hands. 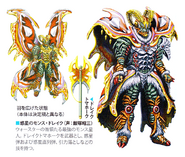