Azazel came to Earth on New Years Eve 2012 to destroy the world. Despite Cheeda Nick's attempts to avert it, Azazel slaughtered the Go-Busters in both continuities. However, it was only when the Tokumei Sentai Go-Busters and the Dobutsu Sentai Go-Busters are gathered that they are able to defeat him by destroying his scythe (his sole weakspot) with a combination of primary universe Hiromu activating his Volcanic Attack and Dobutsu-Hiromu riding on it to hit his blade with his Sougan Blade in the Volcanic Animal Attack. With Azrael now helpless, they finished him off with a combination of the Ichigan Busters Special Buster Mode, Animal Bazooka, and Morphin Blasters in the Animal All Go-Buster Shooting attack. 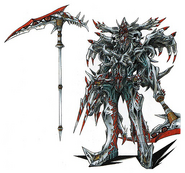