Gozunagumo (ゴズナグモ, 23-24) is a spider-like Ayakashi with a bull head on his torso.

Gozunagumo is unwilling to continue taking orders from Dokoku, which results in him being banished. Gozunagumo recruits Shitari of the Bones to aid him in disposing of Dokoku by finding out what the sealing character is. Though he overpowered the vassals to give Shitari time to get the sealing character from Takeru, Gozunagumo is sucked back to the Rokumon Junk, as the newly awakened Dokoku punishes him for his attempt on him by infusing him with his power, turning Gozunagumo into a mindless beast.

Once done, he was sent out to terrorize the humans before the Shinkengers intervene, trying to hold him off while Genta completes the Inromaru. Once he and Takeru join the way, he is destroyed by the debut of Super ShinkenRed. He revives into his second life, still mutated, with an army of Onanashi and a pair of Onosakamata. The Shinkengers respond by forming DaiKaiShinkenOh for the first time. Once it puts an end to the Onanashi; the Kabuto, Kajiki, Tora, and Ika Origami form the Ika Tenkuu Buster, which DaiKaiShinkenOh uses to finally kill off Gozumagumo and the remaining Onosakamata in one go.

His abilities included spinning around, shooting webs from his mouth and electrify said webs, use the pointers on his arms for a disc-like energy attack, and use the pointers for energy slashes. In his mutated form, he can shoot lightning with the horns on his head, shoot sharp tentacles from his torso, shoot chest beams, and create a stronger version of his energy disc attack.

According to folklore, the ushi-oni (牛鬼, ushi-oni) is a yokai with the head of an ox and a spider-like body. Gozunagumo's spider-like appearance and bull head on his torso is thought to be the basis of this legend.

His design is based on the ushi-oni youkai. 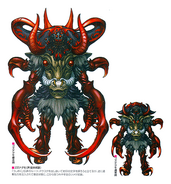