Gouki (ゴウキ, Gōki) is GingaBlue (ギンガブルー, Ginga Burū) of the Gingamen. He is 22 years old (23 in GoGoFive vs. Gingaman, 25 in Gaoranger vs. Super Sentai and 35 as for the Great Legend War in Gokaiger) and a part of the 133rd generation of Gingaman.

Gouki is strong but shy and slightly nervous, and a lover of forests and wildlife. He thought this aspect of his personality would not let him be a good Gingaman, but at the end he even conquered long secret love Suzuko Miyasawa. He is also a good cook and his element is water. Later, with the Lights of Ginga, Gouki can become Super Armor Shine GingaBlue (超装光ギンガブルー, Chōsōkō Gingaburū).

Gouki returned in Gaoranger vs. Super Sentai and lectured Soutarou Ushigome (GaoBlack) on the many strong warriors of the Super Sentai franchise. Although his teammate Ryouma appeared with the other Reds, the two did not interact.

Gouki's appearances in the "Versus Series", Gingaman vs. Megaranger, GoGo-V vs. Gingaman, and Gaoranger vs. Super Sentai, are featured in the Super Sentai Versus Series Theater, hosted by the heroes of Tensou Sentai Goseiger. Hyde (Gosei Blue) also dresses as Gouki in the Gingaman cosplay.

Years later, Gouki fought alongside not only his own team, but every single Sentai ranger in existence, against the Empire of Zangyack when it attacked the Earth in the Great Legend War. After fighting against hundreds of Gormin and their Zgormin commanders. Kaijou noticed the fleet moving towards them, he gathered all the Rangers together and gave them the order to sacrifice their powers to wipe out the first invasion's armada. The GingaBlue powers are later used by Joe Gibken via the Ranger Keys.

After the Gokaigers defeated the Zangyack, Captain Marvelous returned the Ranger Keys to their original owners. It is assumed Gokui and his team have their powers back.

Gouki, alongside his team (bar Hyuuga), among the majority of the Super Sentai heroes, was caught up in the "Super Hero Taisen" incident which eventually resulted in the Super Sentai teams and Kamen Riders joining forces to defeat both Dai-Zangyack and Dai-Shocker. During the final battle, he is seen fighting a Shocker Combatman, and slashing towards Long(which was barely visible to viewers without a keen-eye).

GingaBlue appeared with his team among the first 38 Super Sentai whom collectively empowered Wild Tousai Shuriken King in its fight against the titanic Gillmarda, granting the Ninningers and Zyuohgers the power to perform the Zyuoh Ninnin Super Sentai Burst which destroyed Gillmarda with the combined power of all 40 Super Sentai.

Gouki joined the Super Sentai Strongest Battle as a member of Super Strong Team, where he partnered with GaoBlack and fought against TimeRed and RyuuRanger of the Martial Artist Team in the fourth round, but ultimately lost the match for his team and was eliminated from the competition.

As GingaBlue, Gouki has the ability to channel his Earth power into water based attacks

Replace with transformation/rollcall image and replace infobox image with profile photo as stated in guidelines if it hasn't been.jpg
Replace with Ranger Form Name
Replace with roll call Quote 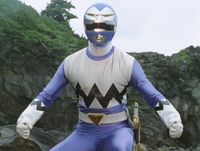 The GingaBlue Ranger Key (ギンガブルーレンジャーキー, Ginga Burū Renjā Kī) is Gouki's personal Ranger Key and what became of his powers after he along with the rest of the 34 Super Sentai sacrificed their powers to end the Great Legend War.

This key along with the majority of the Ranger Keys were collected by the Red Pirates and later used by the Gokaigers. The GingaBlue Ranger Key was mainly used by Joe Gibken (Gokai Blue), who used it to fight as GingaBlue.

The GingaBlue key is one of the five water-element Blue Ranger Keys that are used by Gokai Blue for his Five-Blade Style Blue Slash Final Wave attack, which was used once against Zodomas. This attack involved summoning manifestations of the five Rangers to attack the target, with GingaBlue being the fifth to go.

After Zangyack were finally defeated, the Gokaigers gave the Ranger Keys back to their rightful owners. Gouki received his key and became GingaBlue once more.

GingaBlue is among the vast pantheon of Rangers which are available in the mobile game Super Sentai Battle Base, with his Super Armor Shine upgrade being available as well.

GingaBlue appears with his team among all Sentai in the mobile game Super Sentai Legend Wars.