Gosei Wonder (ゴセイワンダー, Gosei Wandā) is a blue jet-like Gosei Machine that is featured in Tensou Sentai Goseiger: Epic on the Movie. It has five Headders, and can separate into five Gosei Machines and it can shoot different colored energy beams from each of the Headders. Each then combine to become Wonder Gosei Great.

Epic on the Movie

The Goseiger's couldn't form Gosei Great because the Dragon Headder was damaged by Gyōten'ō during his fight with Alata. Rasil hoped for a miracle and this created the Gosei Wonder card that the Goseiger's used to summon Gosei Wonder.

It's second and final use came when Metal Alice blew up a bridge connecting the rails on a high-speed train that Nozomu's mother was allegedly on and he prayed that a miracle would happen. His faith in the Goseigers and his love for his mother produced a miracle that allowed the Goseiger's to summon Gosei Wonder again. The Headder's formed a new bridge and GoseiKnight in his Headder form formed an electric current that allowed the train to pass by. Wonder Gosei Great and Gosei Ground both were then able to stop an enlarged Alice.

Gosei Red
Gosei Bird (ゴセイバード, Gosei Bādo) is an eagle-themed Gosei Machine that resembles Gosei Dragon that comprises the body of Gosei Wonder, and then the upper body and head of Wonder Gosei Great as well as the Gosei Bird Axe. 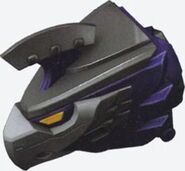 26,000,000
Tensou Combination Wonder Gosei Great (天装合体ワンダーゴセイグレート, Tensō Gattai Wandā Gosei Gurēto) is the combination of four Gosei Machines with the Kabuto, Dolphin, Elephant, and Crocodile Headders and Gosei Bird. It wields the Gosei Bird Ax (ゴセイバードアックス, Gosei Bādo Akkusu) as its weapon, fashioned out of Gosei Bird's tail. Wonder Gosei Great's final attack is the Wonderful Strike (ワンダフルストライク, Wandafuru Sutoraiku) launching the Bird Headder at the target with the Gosei Bird Ax in its beak, spinning rapidly on its side as it does so.