Captain Goro Hoshino (星野 吾郎, Hoshino Gorō) is OhRed (オーレッド, Ō Reddo), the leader of the Ohrangers. He served with his team at age 25, and is still one of the acting chiefs of UAOH at age 41 in Gokaiger.

An ace pilot and the team leader, Goro is the first to receive his powers. He is cool-headed and quick-thinking person. However, his stubbornness brings him and his teammates much trouble at times. He is an expert in karate, kendo, and judo. The others call him "captain."

OhRed is among the Sentai warriors seen in clips when Yusuke Amamiya (Red Falcon) lectured Gaku Washio (GaoYellow) about the past Sentai sword experts, showing him that the true sword wasn't the sharpest, but the one that feeds on courage.

Led by his Liveman predecessor Red Falcon, he appeared as one of 24 previous Red Rangers in Gaoranger vs. Super Sentai together with fellow Red Rangers from his predecessors AkaRanger to NinjaRed to his successors from Red Racer to TimeRed.

Years later, Goro fought alongside not only his own team, but every single Sentai ranger in existence, against the Empire of Zangyack when it attacked the Earth in the Great Legend War. He fought against hundreds of Gormin and their Zgormin commanders. After Akarenger noticed the fleet moving towards them, he gathered all the Rangers together and gave them the order to sacrifice their powers to wipe out the first invasion's armada. The OhRed powers are later used by Captain Marvelous via the Ranger Keys.

He later appears to make a transaction with Basco ta Jolokia: their Greater Power for information on the location of the Zangyack Flagship, the Gigant Horse. However, the trade was a ruse as Goro wanted to take back the stolen Greater Powers, which he failed in doing.

He instructed his teammate Momo Maruo to give the Gokaigers their Greater Power if the worst should happen, but instead the Gokaigers came to save him and defeated Basco. However, the Gokaigers are soon overwhelmed by Basco's true form and all but Marvelous lay unconscious with Goro and Momo rushing to their aid.

After getting them back on their feet, Goro tells the Gokaigers if they needed to combine their powers, to use the Greater Power of the OhRangers which in turn inspired Don Dogoier to use their Greater Power to complete the Gokai Galleon Buster.

After the Gokaigers finally defeat the Zangyack invasion force on Earth and the Emperor, Marvelous returned all of the Ranger Keys to their original owners. It is assumed Goro and his team have their powers back.

Goro, alongside his team (bar KingRanger), among the majority of the Super Sentai heroes, was caught up in the "Super Hero Taisen" incident which eventually resulted in the Super Sentai teams and Kamen Riders joining forces to defeat both Dai-Zangyack and Dai-Shocker. During the final battle, he is seen with Sokichi Banba fighting Long.

OhRed appeared as part of a conference of the first 38 Reds led by Red Falcon, whom addressed the Ninningers and Zyuohgers as the greater Super Sentai pantheon intervened to save them from defeat at the hands of the titanic Gillmarda. Empowering the Combination Nin Shuriken to form Wild Tousai Shuriken King, the first 38 Super Sentai further imbued their successors with the power to perform the Zyuoh Ninnin Super Sentai Burst, destroying Gillmarda with the combined power of all 40 Super Sentai.

Battle2: The Secretive Armor of Mystery

Goro joined the Super Sentai Strongest Battle as a member of Leader Team, where he partnered alongside NinjaWhite and fought against RyuuRanger and Red Mask of Martial Artist Team in the third round of the competition. When the match was interrupted by Gaisorg, none of the four Rangers present were able to defeat him. During the fight, RyuuRanger was knocked into the Moebius gem, indirectly winning the round for his team.

Goro alongside with his Sentai Red Rangers predecessor and successors appeared to help Zenkaigers.

Goro Hoshino/OhRed: to be added

OhRed is among the vast pantheon of Rangers which are available in the mobile game Super Sentai Battle Base.

OhRed appears with his team among all Sentai in the mobile game Super Sentai Legend Wars. 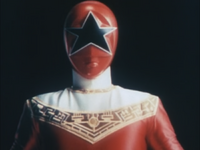 The OhRed Ranger Key (オーレッドレンジャーキー, Ō Reddo Renjā Kī) is Goro Hoshino's personal Ranger Key and what became of his powers after he along with the rest of the 34 Super Sentai sacrificed their powers to end the Great Legend War.

This key along with the majority of the Ranger Keys were collected by the Red Pirates and later used by the Gokaigers. The OhRed Ranger Key was mainly used by Captain Marvelous (Gokai Red), who used it to fight as OhRed. It was also used by Don Dogoier (Gokai Green) and Gai Ikari (Gokai Silver) on one occasion each.

The Ohranger keys, along with all the Ranger Keys of the first 33 Super Sentai, were briefly taken by the Black Cross King and turned into Ranger puppets that were fought by the Gokaigers and the Goseigers. Splitting up, the puppet OhRed was defeated as part of a group of surviving Red warrior keys by Gokai Red and Super Gosei Red.

After Zangyack were finally defeated, the Gokaigers gave the Ranger Keys back to their rightful owners. Goro received his key and became OhRed once more.

As the ninteenth Red, OhRed's Red Warrior Spirit was embodied by AkaRed.