The Gormin first appeared on Earth in the Great Legend War. There, hundreds of them, led by dozens of Sugormin, fought against the past 34 Super Sentai teams. The Sentai teams put up a good fight and the Zangyack forces took a hard beating, but the Sentai Great Army's leader, Akarenger, noticed the fleet moving towards them, he gathered all the Rangers together and gave them the order to sacrifice their powers to wipe out the first invasion's armada

When Hyuuga requested that Gai Ikari (Gokai Silver) give him the GokaiCellular, Gai envisioned him turning into Gokai Silver and defeating a group of Gormin.

Basco ta Jolokia used a squad of Gormin, which were presumably provided by Damaras, to cause havoc across the city, in order to find Matsuri Tatsumi (GoPink) when she came to help so he could take the greater power of GoGoFive.

TV STORY-Ep. 23: People's Lives are the Future of the Earth.

In the final battle on Earth, numerous Gormin and Sugormin stationed on the Gigant Horse were defeated by Gokai Red and Gokai Silver as they, having boarded after ramming into the flagship in the Free Joker, fought their way to Emperor Ackdos Gill. Countless Gormin and Sugormin were destroyed when Gokai Red turned the Gigant Horse's weapons against and annihilated the massive Zangyack Great Fleet that had been assembled from across the universe. The Gigant Horse was destroyed and Emperor Ackdos Gill died at the hands of the Gokaigers soon after, and so the Space Empire Zangyack would fragment into divided factions over the following month.

A pack of Gormin Sailors were a part of the revived Dai-Zangyack army led by the new Emperor Gokai Red to wipe out the Kamen Riders, ensuring the survival of the Super Sentai. As part of the Zangyack force, the Gormin participated in the attack on Amanogawa High School

in which Gokai Red fought its resident Kamen Riders Fourze

. After Tsukasa and Marvelous' ruse was revealed and Dai-Zangyack joined with Dai-Shocker

to form the Shocker-Zangyack Alliance, the combined army was wiped out by a gathering of Kamen Riders and Super Sentai.

An army of Gormin and Sugormin were a part of Bacchus Gill's Zangyack remnant army, led by Waredonaiyer, which was wiped out by the Go-Busters and Gokaigers as well as the Kyoryugers.

summoned a pack of Gormin Sailors as one of four Super Sentai Villains' combatman forces. They were soon wiped out by the Kyurangers fighting alongside Space Sheriffs

As the then-incumbent foot soldier army, the Gormin were added to the arcade game Super Sentai Battle: Dice-O where, as on TV, their job is to take the punishment dished out by the Super Sentai teams.

The Gormin are among the various foot soldier forces which appear in the mobile game Super Sentai Battle Base.

The Gormin Sailors are among the various foot soldier armies which appear in the mobile game Super Sentai Legend Wars.

Gormin are silver humanoid robotic grunts who normally operate in squads led by a trio of Sugormin. They're armed with bladed cudgels that can be converted into rifles (the handle serves as the barrel and the club head as the stock and trigger) or as grenade launchers where the club head is fired as an explosive projectile. During the invasion of a planet, entire squads of Gormin are deployed from Zangyack ships via magnetic cranes which adhere to the Gormins' helmets and deposit them onto the ground.

TV STORY-Ep. 2: The Worth of this Planet Aside from ground combat, Gormin are also the crew of Zangyack Battleships and while off duty are known to take part in recreational activities such as card games. Gormin are frequently the target of abuse at the hands of their Sugormin superiors. 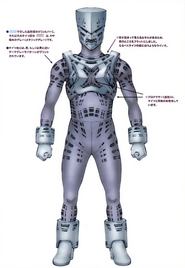