"And now for an end TO THOSE POWER RANGERS!"
―Goldar when he was grown for the third time.[src]

"I have returned! Who is it that is given me new life?"
―Goldar, upon being revived by Scrozzle.[src]

"You are the joke!"
―Goldar when he was about to destroy Sledge.[src]

"I NEVER SURRENDER TO RANGERS!"
―Goldar Yelling to 14 Rangers from three dino teams and his final words before the ultimate death.[src]

Goldar (or Flydar in the pilot episode), was a powerful yet very overconfident warrior that served under the command of Rita Repulsa and Lord Zedd. He usually fought alongside Scorpina or Rito Revolto. Goldar was a humanoid manticore with red eyes and a husky voice, who sported a golden suit of armor with a matching helmet. Goldar is often referenced, as a monkey, or flying monkey, however, possibly to draw parallel between Rita Repulsa and The Wicked Witch of the West.

According to the first conversations between Goldar and Lord Zedd, Goldar served Zedd with unquestioning loyalty before he was assigned to Rita's team. Where and for how long he served Zedd is unknown.

Goldar led his Empress' very first invasion against the Earth. However, he soon faced the Power Rangers and was beaten by their Megazord after an intense fight (which is in contrast to his Zyuranger version). He also became notable for telling Rita what to do frequently (which Rita told him never to do again in "Doomsday" part 2), and always promised that they will get revenge for their schemes' failures, even though they really didn't in the end. He also has been called a "bumbling fool" by Rita in "A Star is Born", and was scolded by Rita vehemently in "Happy Birthday, Zack", being called a "worthless misfit" and a "dweeb". This pattern also happened when Lord Zedd was introduced as well; in addition to insulting the now apparently-incompetent golden warrior, he often blamed Goldar for his own failures, and had a habit of silencing him (and Squatt and Baboo) frequently, which is the reason why Goldar doesn't have as many lines in the other two seasons than he does in the first season.

Ever since then, Goldar fought the Rangers and their Zords, growing a strong hatred for Jason and Tommy, the Red and Green Rangers, for their continual victories in single combat. Goldar also had a Zord of his own known as Cyclopsis, an ancient war machine, but this Zord was defeated by the Rangers' Ultrazord after a prolonged battle. He was also involved in one of Bulk and Skull's more memorable encounters with a monster, in which Goldar (giant sized) picked up a bus with the two bullies inside.

When Lord Zedd arrived on the moon, Goldar eagerly abandoned Rita for his old master, regaining his wings in the process. As Zedd's right hand man, Goldar led many missions for him, encountering Tommy (now the White Ranger) again and again. Each time they fought, the White Ranger would best him, sending Goldar back to Zedd in disgrace. When Rita returned to the moon and married Zedd, Goldar was aghast. When he finally discovered it was a sham, he immediately set out to make things right and had Finster create an antidote for the love spell Rita used. Unfortunately for Goldar, it was revealed that Zedd had come to love Rita on his own, potion or not. Even after Rita dropped her secret plans of usurping Zedd, Goldar still had a massive dislike for her. Often paired with Rito Revolto, Goldar was disgusted by the skeleton's stupidity (and stench), although they eventually became friends of sorts. This is shown to be true as Rito gave him a Christmas present and he accepted it without argument.

Goldar was also essential in Lord Zedd's powering of the Shogun Zords, as he soundly defeated Ninjor, allowing Zedd to capture and use him as a power source for the Shogunzords.

After destroying the Ninja Power Coins in the episode "Climb Every Fountain," Rita and Zedd assigned Goldar and Rito the mission of planting a bomb under and inside of the Command Center. but it was defused by Alpha 5. The two were then given a map of the Command Center's basement (that Zedd found) and entered the Center through an underground labyrinth of tunnels that the rule of Power Coins only did not apply to. The duo succeeded in stealing the Zeo Crystal (although he didn't escape with it) The bomb went off, and the Command Center exploded.

However, Goldar and Rito somehow lost the Crystal, and their memories (and in Goldar's case, his wings), and ended up wandering around Angel Grove. They eventually found Bulk and Skull, and ended up becoming their butlers in exchange for food and shelter. Zedd and Rita eventually found them and restored their memories (and Goldar's wings). They returned to their employers and helped them in their quest to destroy the Machine Empire.

Goldar made his reappearance in the premiere episode of In Space during Dark Specter's conference, where he was responsible for revealing Andros's identity. His final appearance was in the Power Rangers in Space finale, Countdown to Destruction appearing alongside Rita, Zedd, Squatt, and Finster when he fired an energy blast strong enough to send Trey of Triforia flying away. His absence after Zordon's Energy Wave suggests that he was turned to dust alongside the majority of other villains in the United Alliance of Evil, something that is confirmed twenty-two years later.

Goldar's sword is one of the many villain relics in Ryjack's collection that are acquired by Evox and his minions (what exactly killed Goldar is not made clear but he was most likely a victim of Zordon's energy wave). On Evox's orders, Scrozzle uses Ryjack's reanimizer powered up by diamonds on Goldar's sword, reviving Goldar as an even more powerful version of the original known as Goldar Maximus. Upon learning that Evox is the one who resurrected him, Goldar Maximus pledges his loyalty to Evox. The recently-revived Sledge mocks him, saying that he had more power in his toe than Goldar, causing Goldar Maximus to attack him. Evox then orders Goldar Maximus to destroy Sledge, which he proceeds to do, despite Sledge pleading with them. Making Bad Goldar accompanies Snide to the Dino Charge dimension and fights the Dino Charge Rangers, quickly overwhelming them and the newly arrived Beast Morphers Rangers. He easily took Koda down and stole his Energem before fighting off Ravi, Nate, Steel and Zoey. He easily overwhelmed and demorphed them and destroyed their Morphers off-screen. They then went to find Scrozzle whom was assembling a secret weapon to use against the Rangers and Goldar cut open a geode for him. Goldar and Snide later appeared alongside some Putties, Triptoids and Vivix to attack Jason, Zoey and Ravi when they tried to ambush Evox and Scrozzle from behind. He, Roxy, Snide and the army attacked but Ivan's Lightning Final Strike took out Roxy and the Z-Rex Blaster destroyed Snide with Tyler taking down Goldar. He refused to surrender but the Rangers combined the Dino Spike, Power Blaster, and Z-Rex Blaster into the Dino Power Ultra Blaster which took Goldar out once and for all. Grid Connection

Goldar is the main villain in the Mighty Morphin' section of the game. He is first seen complaining about Rita making him do her dirty work once again. Suddenly, Lord Zedd appears in a time hole and tells him to contaminate Angel Grove's water supply, zombifying everyone there to form an army of Z-Putties. Goldar follows Zedd's demands, however the Power Rangers are hot on his tail. The "chase" ends at Angel Grove, where Goldar is ready to contaminate the water supply, however the Power Rangers stop him and he is forced to grow. He is defeated in the Megazord battle. In the game, he is voiced by Nolan North this time. 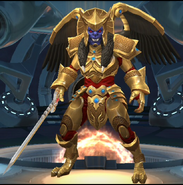 Mega Goldar
Add a photo to this gallery

Goldar is among the villains who feature in Power Rangers Legacy Wars and Power Rangers: Battle for the Grid. Additionally, the exclusive Mega Goldar form is introduced.

Unlike many other henchmen, Goldar was one of the few who was capable of holding his own against the entire Power Ranger team. As time went by in the series, Goldar's character became less threatening and more comical, especially in the first feature film. He was a dangerous fighter initially, being able to defeat the original team in battle single-handedly. Later, however, he began to lose his edge, with Jason handing him his first major defeat in the episode Missing Green. After this point he was apparently less powerful, losing to the Rangers more and more in combat.

Goldar has a bit of friendship with Rito, though he is often annoyed with Rito's bumbling. Overall the two share a good relationship.

Goldar is close comrades with Scorpina, on a few occasions, the two appeared to be flirting. In the script for the cancelled episode, Honey, I Shrunk the Rangers, Goldar had planned a date with Scorpina, but Rita made him cancel it in favor of going on another mission against the Rangers, much to his dismay.

From the first episode, Day of the Dumpster, to Lions & Blizzards, the Goldar costume looked like Grifforzer, his Zyuranger counterpart. This caused his snout to rise whenever he was talking. Starting with Crystal of Nightmares, the head was modified so that the jaw (or just the bottom teeth) would move down. This new costume was used for all footage filmed in the U.S. onward, but the rising snout Goldar would appear in recycled footage in the second season.

In addition to the changes in his facial appearance, the revised costume notably has a pair of extended wings. Although Goldar is shown with the ability to fly in early episodes, the wings on the original costume are folded behind him and later disappear for reasons not explained within the season. In The Mutiny, Part I when Goldar immediately defects from Rita upon Lord Zedd's arrival, the evil emperor states, "Your spineless, sniveling attitude leads me to believe you will serve me well. For that, I shall restore to you what was once taken away." Zedd then uses his staff to re-grant Goldar his wings. Although he was seen with his wings when in Rita's palace, they disappeared whenever he grew and would continue to appear and disappear throughout the season with no explanation.

Goldar as he originally appeared.

Goldar without his wings.

Retrieved from "https://powerrangers.fandom.com/wiki/Goldar?oldid=913700"
Community content is available under CC-BY-SA unless otherwise noted.