A movie for Kaizoku Sentai Gokaiger and Tensou Sentai Goseiger

Gokaiger Goseiger Super Sentai 199 Hero Great Battle (ゴーカイジャー ゴセイジャー スーパー戦隊１９９ヒーロー 大決戦, Gōkaijā Goseijā Sūpā Sentai Hyakukyūjūkyū Hīrō Daikessen) is a film released on June 11, 2011, to commemorate the 35th anniversary of the Super Sentai Series. The film stars the casts of Kaizoku Sentai Gokaiger and Tensou Sentai Goseiger, among the 199 total heroes from the Super Sentai series. On March 16, 2011, Toei released a statement that the Great East Japan Earthquake had delayed filming and that the movie's release date was moved from its original May 21 date. It was released on DVD/Blu-Ray on November 21, 2011.

The Space Empire Zangyack forms an alliance with the Black Cross Army and their revived leader, the Black Cross King, in order to invade Earth with the other Super Sentai enemies that were also revived. The Gokaigers, along with the Goseigers, who have lost their powers from the Legend War, must team up in order to fight against the new enemy.

The film begins during the Great Legend War, where the Goseigers are outnumbered by the Space Empire Zangyack after Gosei Great is heavily damaged. They duck for cover as they come under fire by Zangyack ships. The newest Super Sentai team find themselves surrounded by Gormin and Sugormin. Akarenger and Big One rescue the Goseigers. The two Legends tell the Goseigers to join them in assembling all of the Super Sentai Groups to defeat the invaders. DekaMaster, DekaSwan, Hyuuga the Black Knight, Princess Shinken Red, Wolzard Fire, MagiMother, Zubaan, Signalman, Rio and Mele appear to clear a path for the heroes. All 34 Super Sentai groups converge for one last battle and topple whole squadrons of Gormin Sailors and Sugormin Non-Commissioned Officers, but are overwhelmed by the Zangyack battleships. Akarenger gives the order for all of the groups to combine their powers into one attack, which wipes out the entire Zangyack invasion fleet.

Consequently, all of the Super Sentai warriors lose their powers, which are dispersed all over the universe, which while flying over the Earth, AkaRed noticed the powers flying all over the universe. The Goseigers, Satoru Akashi, Saki Rouyama, Chiaki Tani, and Genta Umemori all note that their powers were drained after using them to defeat Zangyack's armada. Alata notes that despite not having powers, they could still defend the planet. Despite the sacrifice, new Zangyack forces return a few years later. However, by then the majority of these powers have since been recovered by the Gokaigers, who use them in the form of Ranger Keys as part of their arsenal in their quest for the Greatest Treasure in the Universe.

On present-day Earth (between Gokaiger episodes 16 and 17), the Gokaigers battle a platoon of Gormin and Zugormin led by Barizorg and Insarn, using the core Go-Onger, Dynaman, and Fiveman Ranger Keys. Right when they are about to use the Goseiger Ranger Keys, Agri and Moune steal them. The Gokaigers are left in confusion when the Gosei Angels regain their powers and transform into the Goseigers to battle the Zangyack before Barizorg and Insarn make their retreat. Both Super Sentai groups then engage in an argument over the possession of the Goseiger keys. Alata apologizes for his team's actions, but he asks the Gokaigers to surrender the Gosei Knight Key as without his powers Gosei Knight has been trapped in his Groundion form. The Gokaigers refuse and demand the Goseiger keys back since they're needed to find the Greatest Treasure in the Universe. Following some further disagreements, the Gokaigers and Goseigers battle each other before they execute their finishing attacks, which end the battle in a stalemate. Meanwhile, aboard the Gigant Horse, Warz Gill and his crew are paid a visit by Black Cross King of the Black Cross Army, who proposes an alliance between the two evil organizations. Although Gill initially refuses, Black Cross King promises that his only interest is in destroying any Sentai teams and not the takeover of Earth. Seeing that the alliance means little risk and high reward, Gill agrees.

At an elementary school, Daigoro Oume offers some of his anpan and plays with the school children when he sees a boy holding a DaiDenzin toy, which brings back memories of his days as DenziBlue. He gives the boy an anpan before heading to his next destination. While waiting at a crosswalk, he sees Ryo of the Heavenly Fire Star save a salary-man from being run over by S.P.D. Officer Koume "Umeko" Kodou. The reunion of the three former Super Sentai warriors leaves the salary-man crying. Later, while revealing a toy replica of the Variblune inside his bag, the salary-man explains to the three former heroes that he lost all hope in life when the Super Sentai groups lost their powers after the Legend War. The heroes, however, encourage him to value life.

Back aboard the Gokai Galleon, Doc finds the Gosei Knight Key in the Gokai Treanger Box recognizing it as one of ones the Gokaigers recently acquired. The pirates begin to discuss a plan of action to retrieve their stolen keys using the Gosei Knight key as bait, but Doc and Ahim feel uneasy about going up against a fellow Sentai team. Suddenly the discussion becomes moot when the ship is suddenly attacked by Gosei Great, forcing the Gokaigers to form GokaiOh and brawl with the Goseigers' mecha. During the battle, Gosei Red sneaks into GokaiOh's living quarters and steals the Gokai Treasure Box, with GokaiRed in pursuit. GokaiRed recovers the box while Gosei Red takes the Gosei Knight Key much to the Knight's appreciation. Suddenly the Gigant Horse suddenly appears and attacks the two teams before Black Cross King takes possession of the Treanger Box. Black Cross King also brings out the resurrected Brajira of the Messiah, Hades God Dagon and Yogoshimacritein, who teleport the two groups out of the scene before disappearing. Navi is left confused by the incident until he sees the Gosei Knight Key on the ground, having been dropped by Alata during the chaos.

Captain Marvelous and Alata find themselves inside an office that is frozen in time, where they are attacked by Brajira and his army of Bibi Soldiers. Doc, Ahim, Eri and Hyde are teleported on a forest bridge before being ambushed by Dagon and his platoon of Zobils. Joe, Luka, Agri and Moune wind up in a Feudal Japan setting. They feared they had went back in time, but it turns out to be a movie set run by Yogoshimacritein. Meanwhile, Black Cross King announces to the world that the Gokaigers and Goseigers are out of commission and the planet will be taken over by the Space Empire Zangyack/Black Cross Army alliance.

Despite their differences, the Gokaigers and Goseigers use their combined teamwork to defeat the three resurrected villains and return to the real world. The Goseigers are reunited with a fully-restored Gosei Knight (Navi having used the Ranger Key to return his powers), but Black Cross King has them facing the 33 Super Sentai groups brought to life from the Ranger Keys he stole. The Gokaigers and Super Goseigers transform and engage in a grueling battle with the Super Sentai groups, but they manage to revert them back into Ranger Keys, which fly back into the Gokai Treanger Box. The Black Cross King then grows into giant size and attacks the two groups when the Ranger Keys suddenly glow and blind him.

After Gosei Ground is knocked down by Black Cross King, Nozomu Amachi and the salaryman have the school children and all of the citizens cheer for the two Super Sentai groups, which causes GokaiOh and Gosei Great to regain energy before they are joined by the main mecha of the other 33 groups. Black Cross King once again resurrects Brajira (and his four Buredoran personas), Dagon and Yogoshimacritein with other past villains in giant form, but they are quickly dismantled by the mecha.

When the Akarenger Key starts to glow, the Gokaigers use the Greater Power of the Gorengers to combine Variblune with GokaiOh, forming Goren GokaiOh before finishing off Black Cross King with the Gokai Hurricane Cassiopeia. The 33 past Super Sentai mecha vanish as the crowd thanks the Gokaigers and Goseigers for saving the day.

Back aboard the Gokai Galleon, the Goseigers return their Ranger Keys back to the Gokaigers (along with granting them their own Greater Power) having decided that its best to keep all the past Sentai powers in one place and knowing that they're in good hands with the Gokaigers. With their biggest battle yet behind them, the Galleon sails off as a man in silver watches, waiting for his chance to reveal himself.

Ryo of the Heavenly Fire Star/RyuuRanger

The Black Cross King steals the Gokai Treanger Box and, through the use of a special launcher in which he dumps all 176 Ranger Keys that were contained in the box, summons manifestations of the first 33 Super Sentai teams (excluding the Extra Heroes, whose Ranger Keys were still in Basco's possession) to fight against the Goseigers and Gokaigers:

Gokaiger Goseiger Super Sentai 199 Hero Great Battle was released on DVD and Blu-ray on November 21, 2011, the same day as the release of Volume 5 of the Kaizoku Sentai Gokaiger TV series. [2] 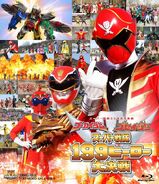 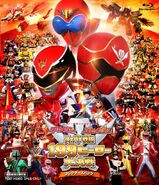