Number 48: The Real Face Under The Mask

"My dear treasure. Nurse (Gangler Name) back to health."
―Goche's incantation to growing a defeated Gangler.[src]

Goche Ru Medou (ゴーシュ・ル・メドゥ, Gōshu Ru Medu) was a greedy female doctor in the Interdimensional Crime Group Gangler. She used the powers of the Gros caliber syringe from the Lupin Collection to perform reconstructive surgery, reviving and enlarging the members of the Ganglers to giant size.

Greeting Dogranio Yaboon upon his arrival in the Gangler mansion, she attempted to kiss his hand after wishing him a happy 999th birthday until Dogranio's bodyguard Destra Majjo prevented her from doing so. Dogranio, however, told Destra to stand down and let her kiss his hand.

Witnessing the destruction of Garatt Nargo alongside Dogranio and Destra, she then goes to Earth and from the syringe Lupin Collection put in her back safe, she shoots a beam of light into Garatt's surviving safe, enlarging him as a giant.

Seeing Namero Bacho sculpt a statue of Dogranio, Goche appreciated his blatant methods as did Dogranio. When Namero was destroyed by the Lupinrangers, she came down to Earth to revive and enlarge him before returning. To her and Destra's shock, the statue was later destroyed in Namero's battle with PatKaiser, leaving only the feet.

TV STORY-Number 3: Take Them Back No Matter What

Knowing that Rubroom Jaws had kidnapped some humans, she asked Dogranio to buy some of the humans for her experiment's guinea pigs, something that was scorned by Destra, until she pointed her syringe to him, saying she worked on Dogranio's behalf and just wanted some rewards. Finally, Dogranio complied to her wish and asked Destra to buy some of the humans, as trading is a part of a gangster's life. Coming down to Earth after Rabroom's defeat, she stepped on the monster's safe before enlarging him, asking him to gather more humans for her.

Goche learned that Destra had went behind Dogranio's back to give his former henchman Bundorute Peggy of pursuing additional pieces of the Lupin Collection: Cyclone Dial Fighter and Trigger Machine Biker. Confronting him over this, Destra vehemently denied any ill intent towards his boss, and confided that he was investigating the Lupin Colelction, believing that there was a difference between the treasures used by the Ganglers and that of the humans.

After Bundorute escaped from an attack by the Patorangers, Goche approached him saying that his human former had been revealed to his enemies. She said she would alter it for a price, but after he requested to be given more power, she said that would cost a great deal more. After the modified Bundorute was defeated, she revived and enlarged him.

TV STORY-Number 6: What to Protect

Goche's safe piece was collected by Kazemi who used Yesterday Once Again to revive her along with Destra Majjo and some other Gangler monsters. After they managed to repel the Patrangers and Luparangers, Destra convinced her to help rescue their boss, even though Goche initially felt hesitant after his betrayal of her. On their way, they were intercepted by X and the newly appeared Ryusoulgers but they escaped eventually and arrived at the GSPO's prison. They succesfully rescued Dogranio and returned to Gangler Mansion. Goche acquired SirenStriker and put it in her safe.

The Ganglers later launched a full invasion on Earth. With the help of the newly revived Zamigo Delma, they overpowered the two Sentai teams but the cheers from the audience helped the heroes turn the tide. Goche and Samon Shakekisutanchin engaged Patren 3gou and Lupin Yellow in combat, but distraction from the Gangler monster allowed the female Rangers to subdue her and reclaim SirenStriker. After wounded by Super Patren 3gou's Super Superior Strike, Goche, Destra, and Dogranio were destroyed once and for all by the combined finishers from both the thief and the police Rangers.

Goche tends to be flirty with Dogranio in order to get things from him. However, she doesn't always go with some of his decisions, a great example being his order for Ryugu Tamatebacco to be enlarged. She is also shown to have a sadistic side as well, as she performs human surgeries for fun and finds the thought of experimenting on unique specimens, such as Noël, exciting. She is also bratty and slightly mischievous, and didn't hesitate to mock Destra Majjo for his loss against her win.

At her end, infuriated by Dogranio's betrayal, she took her frustrations out on the VS Sentai, doing everything in her power to eliminate them, even if it meant suicidally transplanting her only safe. 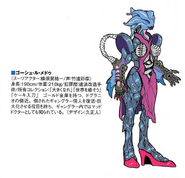 Her name is a corruption of the French word "gauche", which can mean "left", "awkward", or "tactless", which reflects her status as Dogranio's left-hand commander as well as her lack of tact when it comes to her affection towards him, a trait that sets her apart from Naria. Her family name, "Re Mede", is based on the French word "remède", meaning "remedy" or "cure".