Case File 50: To an Infinite Tomorrow

Gien (ギエン, Gien) was a robotic scientist who served as Don Dolnero's partner and the final antagonist of Mirai Sentai Timeranger. Despite his psychotic, cruel, and downright evil tendencies, Gien is one of the more tragic characters in the series.

Gien was actually a cyborg, formerly an uneducated, human boy who befriended Don Dolnero in 2990 when he was hiding from the Kuronz Family, who nearly killed Gien for refusing to reveal Dolnero's location to them. Dolnero saved his life by having a friend of his transfer the boy's brain into a robotic body. There were horrible side-effects that made, and still are making, Gien increasingly insane. He had access to the Hell's Gate Prisoners and cared for nothing except for his own maniacal pleasures, going against Dolnero's orders sometimes as well. He also constructed several massive robots, that are powered by the Lambda 2000 crystal he stole from the Kawasaki Laboratories twice. He also attempted to take control of the V-Rex as well.

After seeing the G-Zord in action, Gien created a device to drain the power from the G-Zord and then from the Timerangers robots. During the last second, Tatsuya Asami arrived to help his friends, beating Gien before destroying his device.

Though the G-Zord was destroyed, Gien used the Lambda-2000 he stole to assume his role as the "God of Destruction". Don Dolnero eventually tried all in his power to stop Gien, only to die in the vain attempt. Gien later piloted the NeoCrisis robot, wired into his creation as he destroyed everything in his path. In the end, Gien was fatally wounded when his robot was destroyed by the V-Rex. The person Gien once was resurfaced before he died and dissolved to dust.

As a human, Gien was a kind and very friendly individual. After the side-effects of cyborg surgery, he has become insane including obssesed with murder and destruction. 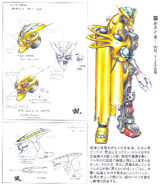