Task 1: The Heart of the Demon God

The true form of the Gordom shrine once the Heart of Gordom was put in place, a colossal humanoid machine modeled after Gordom itself. It was the first giant monster that was fought by the Boukengers in DaiBouken. It was destroyed by DaiBouken's Adventure Drive attack. The Heart of Gordom (clearly visible on the Gordom God's chest unit) was later confiscated and placed into a containment box, and is currently in the custody of SGS. 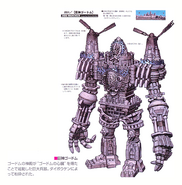 Retrieved from "https://powerrangers.fandom.com/wiki/Giant_God_Gordom?oldid=1036493"
Community content is available under CC-BY-SA unless otherwise noted.