The Ghost Ship Minosaur (ゴーストシップマイナソー, Gōsuto Shippu Mainasō) is a Ghost Ship-themed Minosaur monster from the Warfare Tribe Druidon, created from the negative emotions of Emiko, an ex-girlfriend of Bamba from 50 years ago, and a teacher of Kentaro, based on her desire to see a unique rainbow-colored seashell, found only from the beaches of Mitama town, with which she used to remember him by in the past. 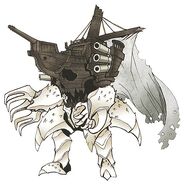