Genta Umemori (梅盛 源太, Umemori Genta) was a childhood friend of Takeru, who came and went from the Shiba Residence when they were younger.

At the Shiba Residence, Genta watched Takeru train to be a samurai. Revealing to Takeru that he also wants to be a samurai, he is given the Ika Origami by the young lord, and starts to train. Genta runs away from his father, a sushi-workman, to study the arts of the samurai. Genta has a rather unusual personality. He is always happy no matter what, he constantly interrupts the other Shinkengers with his non-stop talking, and he makes up strange after-battle rituals.

Genta returns in the present with his own sushi shop, Gold Sushi, and has developed an arsenal that uses "Denshi Mojikara" (Electric Word Power), including the Sushi Changer, and the Sakanamaru. He takes up the mantle of Shinken Gold to help Takeru in a time of need. Shinken Gold controls the element of light. He makes his debut in episode 17.

Genta created and with help from his fellow Shinkenger, brought the Ebi Origami to life. He also powered the Inroumaru up with his Denshi Mojikara and created the lantern companion, DaiGoyou.

He left the Shinkengers as a result of his dismissal in episode 45; however, he was reinstated by Kaoru Shiba in episode 47. He appeared on the team once again in episode 48.

Months after wiping out the last of the Gedoshu, Genta fought alongside not only his own team, but every single Sentai ranger in existence, against the Empire of Zangyack when it attacked the Earth in the Great Legend War. After fighting against hundreds of Gormin and their Sugormin commanders. AkaRenger noticed the fleet moving towards them, he gathered all the Rangers together and gave them the order to sacrifice their powers to wipe out the first invasion's armada.

Genta appeared in Gokaiger Goseiger Super Sentai 199 Hero Great Battle alongside Chiaki Tani as part of the 35th anniversary team. After Chiaki informed the Goseigers that they couldn't transform anymore, Genta further remarks that their powers were drained. Both he and Chiaki appeared to the Gokaiger to support them; even though the Shinkenger Greater Power had previously been granted by Kaoru.

After the defeat of Ackdos Gill, Captain Marvelous returned all the Ranger Keys to the former Sentai heroes. It is assumed Genta and his teammates received their keys, allowing them to get their powers back.

Shinken Gold appeared with his team among the first 38 Super Sentai whom collectively empowered Wild Tousai Shuriken King in its fight against the titanic Gillmarda, granting the Ninningers and Zyuohgers the power to perform the Zyuoh Ninnin Super Sentai Burst which destroyed Gillmarda with the combined power of all 40 Super Sentai.

Genta joined the Super Sentai Strongest Battle as a member of Frivolous Team. It’s unknown whether he participated in the match, but his team lost the first round against the Leader Team. 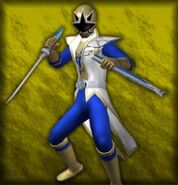 Shinken Gold is among the vast pantheon of Rangers which are available in the mobile game Super Sentai Battle Base, with his Super Shinkenger form being available as well.

Shinken Gold appears with his team among all Sentai in the mobile game Super Sentai Legend Wars.

As Shinken Gold (シンケンゴールド, Shinken Gōrudo), Genta is the Samurai of Light (光の侍, Hikari no Samurai) and uses sushi-themed accouterments to transform and battle, like exploding chopsticks that he uses as a projectile weapon. He also carries the Ebi Origami and Ika Origami.

Genta transforms into Shinken Gold via pressing the light button on the Sushi Changer, then adding the Sushi Disk on it. By shouting "Ikkan Kenjo!" (Consistent Presentation!), the transformation begins.

Shinken Gold uses a sword technique called Iaido, where he uses both the Sakanamaru and it's sheath in both an offensive and defensive style, and is very fast. He also has a rather unorthodox sword style, where his straight slashes are done with a backhanded grip

His final attack is the 100 Fillets (百枚おろし, Hyakumai Oroshi) and consists in turning around the enemy to cut it in multiple pieces. Before that he puts the Sushi Disk on his Sakanamaru to initialize the attack. It is later extended into the 1,000 Fillets (千枚おろし, Senmai Oroshi).

Genta was able to transform from Shinken Gold into Super Shinken Gold (スーパーシンケンゴールド, Sūpā Shinken Gōrudo), along with the other Shinkengers, with the help of the Goseiger's Super Change Gosei Card.

This form is exclusive to Samurai Sentai Shinkenger: The Light Samurai's Surprise Transformation.

This form of Shinken Gold appeared when the Shinkengers became the "Forest Animal Sentai Shinkenger" within Ryunosuke's revolving lantern illusion.

This form is exclusive to The Return of Samurai Sentai Shinkenger: Special Act.

Super Change (スーパーチェンジ, Sūpā Chenji): A Change (チェンジ, Chenji) card that initiates the transformation from Gosei Angel to Super Goseiger. Unlike the other Gosei Cards, the activation call for this card is "Super Tensou!". In Tensou Sentai Goseiger vs. Shinkenger: Epic on Ginmaku, this card was used by Gosei Red to allow Shinken Gold to become a Super Shinkenger without using the Inromaru.

The Shinken Gold Ranger Key (シンケンゴールドキー, Shinken Gōrudo Renjā Kī) is Genta Umemori's personal Ranger Key and what became of his powers after he along with the rest of the 34 Super Sentai sacrificed their powers to end the Great Legend War.

This key, along with the other fourteen sixth ranger keys and the ten extra hero keys, were initally acquired by Basco ta Jolokia and later used by the Gokaigers. Like all of his Ranger Keys, Basco used his trumpet, the Rapparatta, to turn the Shinken Gold key into a puppet to do his bidding. The copy Shinken Gold was one of the remaining ten sixth rangers after the Gokaigers defeated the first five, with Basco using these ten to ambush the Gokaigers and take all of them hostage bar Marvelous. When Marvelous rescued them, they defeated all 10 puppets and claimed the Ranger Keys.

While in the possession of the Gokaigers, the Shinken Gold Ranger Key was mainly used by Gai Ikari (Gokai Silver), who used it to fight as Shinken Gold.

After Zangyack were finally defeated, the Gokaigers gave the Ranger Keys back to their rightful owners. It is presumed that Genta received his key and became Shinken Gold once more.