General Giluke (ギルーク司令, Girūku Shirei): Originally from Planet Girath (ギラス星, Girasu-sei), Giluke is the invasion leader, appearing to be trusted by Bazoo to lead the invasion of Earth. However, he secretly plots on overthrowing Bazoo alongside fellow general Ahames; an initial attempt alongside the Space Beast Marzo failing when prior attempted.Ep. 6: The Targeted High School Girls

Although initially leading the Gozma forces on Earth on his own, he continues to be reprimanded by Bazoo for the continued failures of facing the Changeman. He is further bothered with the arrival of Ahames on Earth; though he wishes to fight alongside her again, Bazoo forbids it knowing of the previous traitorous actions the duo performed working together to overthrow him. It is further hampered when Bazoo decides to only keep one of the two generals around, forcing Giluke to face the Changeman personally when the space lord tells him that he'd only keep either him or Ahames and that victory against the Changeman is the only way to decide which remains.Ep. 19: Bet on Sayaka!Ep. 20: Grand Counterattack! Giluke

After failing Bazoo too many times, Giluke puts into plan his final operation: realizing the power of the "Rigel Aura" possessed by girls of planet Rigel as they change into adults, he pursues Nana, a Rigelian brought to Earth for another scheme, believing that bathing within the aura would give him super power. Though with the Changeman protecting her and Ahames arriving to obtain the Rigel Aura for herself, Giluke continues to go after Nana until the aura begins to awaken. But as she emits it from her body, Ahames steals the aura for herself, preventing him from gaining his ultimate desire. With nothing more to fight for, Giluke goes mad and fights the Changeman, withstanding attack after attack until being hit by the Power Bazooka. But as he falls, Bazoo takes his still-living body and throws him into a black hole, finally ridding himself of his failed general.Ep. 32: Nana! Dangerous ReunionEp. 33: The End of Giluke!?

After his supposed death, Giluke ends up surviving within the space graveyard Bazoo sends him to by fusing his body with that of a dead Space Beast, transforming him into Ghost Giluke (ゴーストギルーク, Gōsuto Girūku). Using the Space Beast's powers and abilities and his now ghost-like body from his "death", Giluke haunts both the Changeman and Ahames due to his grudge against them. Bazoo ends up allowing Giluke to get away with it seeing his increased power and tenacity in being able to escape from his "death".Ep. 38: Ghost BaseballEp. 39: Dreadful Hide-and-Seek

Later, he begins to attack Nana once again to reawaken the Rigel Aura within her in order to finally restore himself. Though others, particularly Ahames, try to stop him even in hopes of using or killing Nana, Bazoo lets Giluke attempt this due to his interest in his tenacity and ambitions. After a couple attempts, he is finally able to regain the Rigelian in exchange for her saving Tsurugi. Completing the Black Mass ceremony, Giluke is somehow able to draw the Rigel Aura from her body again, absorbing it and changing with the energies to become Super Giluke (スーパーギルーク, Sūpā Girūku).Ep. 42: The Sailor-Suited NanaEp. 43: Super Giluke

With their forces becoming desperate, Giluke is given permission by Bazoo to use any means necessary to win, including turning his own men and generals into Space Beasts as war potential. Booba ultimately rebels against the effort, while Shiima ultimately releases herself from the grip by a combination of the "song of nostalgia" of Waraji and the Changeman. Even his former rival Ahames is transformed into a Space Beast, ultimately destroying the EDF base and killing the powerful female warrior.Ep. 48: The Pirate Booba's Storm of Love - Ep. 53: Fiery Ahames!

Finally with no other warriors remaining on the Earth expedition, Giluke is given command by Bazoo to descend in the Gozmard and attack everything, destroying all life on Earth by force. Giluke causes great damage in his attack, but ends up unprepared for a sneak attack by Change Dragon who stabs him in his chest. After surviving the attack, he uses his remaining energy into transforming himself into Giras (ギラス, Girasu), the strongest Space Beast. Although extremely impervious, the Changeman attack the wound Tsurugi created in his chest in a bombardment of attacks before finally destroying him with the Power Bazooka. After Gyodai rebuilds him, Giras continues to show his power until the Changeman thrust Change Robo into the wound, shocking him with Earth Force until finally destroying him with the Super Thunder Bolt, destroying the general once and for all.Ep. 54: Giluke Grand Explosion!

General Giluke is one of five revived villains who overwhelm the Maskmen before being defeated by a gathering of the previous Red Warriors including his old enemy Change Dragon. Hikari Sentai Maskman (manga)

General Giluke appears in the clips from Dengeki Sentai Changeman seen in the first episode of Kousoku Sentai Turboranger.

In his original form, Giluke shows a strong body as well as uses two swords, including one made for the strongest warrior from his homeworld.

A fusion of Giluke and the corpse of the Space Beast Zados, cast into the Space Graveyard at the same time as him. After transforming into Ghost Giluke, he becomes much physically stronger as well as gains the ability to fire beams from his eyes. Though appearing much more powerful, Giluke can only last a short time with each appearance before disappearing due to his now ghost-like nature. 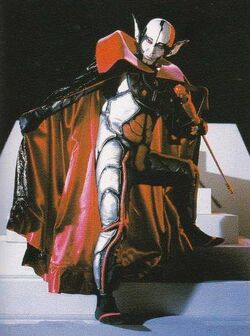 When he transforms to Super Giluke, he gains even further power. He now possesses a scepter which he uses for his "Space Buster" attack, which summons meteors from space to rain down upon the planet. He also gains the power to transform anyone into Space Beast Warriors like Bazoo, which he begins to do with the desperation of the Gozma to take Earth.

Retrieved from "https://powerrangers.fandom.com/wiki/General_Giluke?oldid=798015"
Community content is available under CC-BY-SA unless otherwise noted.