Retroactively, he is also referred to as the RPM Gold Ranger or Gold RPM Ranger, though these are in reference to the show, as opposed to proper labels.

Gem was one of the captive phenoms in 'Alphabet Soup' along with his sister, Gemma. Both speak in conjoined sentences with a high level of energy. They attempted to befriend the solitary DDoctor K and even gave her a birthday present, even though they knew she didn't like them. He and his sister were the original testers for the prototype Ranger gear for Project Ranger. Later on, Doctor K discovers that they were being deceived into staying in the Alphabet Soup facility, and tries to get them out of the facility only to face dire consequences. When Venjix gets past Alphabet Soup and seeps into the world, he and his sister help Doctor K get out of the facility when her "caretakers" tried to kill her. He was last seen with his sister running off to collect the classified Gold and Silver Series Bio-Suits before a section of Alphabet Soup collapsed behind them, seemingly destroying them.

Mysterious Gold and Silver Rangers later appeared twice to save the core Rangers from Venjix's new body. Afterward, they all returned to Corinth, it is within the city that it is confirmed that Gem and Gemma are indeed the mysterious Rangers, and the two are subsequently reunited with an excited teary-eyed Doctor K.

Their Ranger suits, being experimental at the time they were created, do not have the same properties that the other Rangers do. For instance, they cannot manipulate their biospheres like the other five, and the suits themselves have a pilot's jumpsuit design to fit their aircraft Zord design. This includes their wing-like cuffs on the suit which, unlike the wheel or gear (in the case of Green and Black) cuff design on the others, does not spin. He has the series 7 Engine Cell Chip used for the Falcon and Whale zords. Though numbered '7', he is the sixth member of the team. he is numbered this because his zord is numbered 7 hence his current number.

Before reuniting with Doctor K and meeting the Rangers, Gem and Gemma were out in the wasteland on an offensive campaign against Venjix. Because they were out on this campaign for so long, they have a "shoot first, ask questions later" type strategy, which greatly disturbs the more passive Colonel Truman, as well as earns them the nickname "The Boom Twins" by the other Rangers. This makes them trigger-happy, and they take very little time to plan, but more than make up for it with their fighting skills. The twins rarely separate from one another, and it often seems as though they share the same brain, or at least think very similarly, since they always end up finishing each other's sentences, but there have been times where they have had their own individual thoughts. At some point during their time on the run, they were forced to work in a Grinder-building factory. At which point they met a blind girl they would later learn was Dillon's sister.

After the war, Gem and Gemma join Eagle Squadron, now under Scott's leadership, obviously recommended for the posting because of their experience with their aircraft Zords. They seem to be quite excited about their new posting, saying that they "get to blow things up, and get paid for it."

After an alien from Andresia named Orion came across a Silver Ranger Key and a Morpher, Orion gets visions from multiples Sixth Rangers whilst touching the Morpher including Gem and his sister.

Later when Orion has trouble choosing between the RPM Gold and Silver Keys, he has another vision with Gem and his sister which results in the keys being fused together into one. Orion calls out the power of all the Sixth Rangers, including Gem, in order to create the Super Megaforce Gold key. He also appears in the Legendary Final Strike during the first phase of the attack, attacking through the enemy with his SkyShift Blazers.

Gem and Gemma returned with their fellow Ranger Operators as part of the army of Legendary Rangers that helped the Mega Rangers defeat the Armada once and for all, fighting in a huge battle against hundreds of X Borgs and dozens of Bruisers.

When events set into motion by Lord Drakkon caused the timeline to split into pocket universe, each anchored on a powerset, the Ranger Operators were split off into their own pocket universe. He hadn't arrived at Doctor K's birthday celebration to see the first wave of Lord Drakkon's attack. He and his sister fight Lord Drakkon's Forces with their Zords in the others attacks at Corinth.

Gem along with the other Rangers, their Morphers are upgrade by Doctor K, he prepared among other Rangers to teleport on the moon of the World of the Coinless for the fight against Drakkon against his Ranger Sentries, led by Jason.

Later seen during the last battle on the Moon in the World of the Coinless, alongside Levi Weston and Trey of Triforia fighting Jungle Fury Rhino Sentries.

Gem's timeline was later restored by the Mighty Morphin Rangers after they defeated Drakkon.

Gem along with the other Ranger Operators are among all the Ranger teams which appear in the Korean-developed mobile game Power Rangers Dash.

While both Gem and Gemma tend to act relatively simple-mindedly and childishly, Gem and his sister have a genius IQ possibly equal to that of Doctor K, as they can easily understand quantum mechanics. After spending his time with the other Rangers, they eventually grew closer to them and work with the team, rather than just each other, even managing to restrain themselves from simply blowing things up until its necessary. Still, even with this growth, Gem remained a lighthearted, easily excitable member of the team. 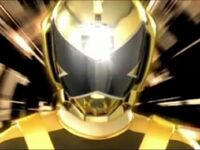 The Ranger Operator Series Gold Ranger Key is Gem's personal Ranger Key. This key along with the other 14 Official Sixth Ranger Keys are seen lining the Command Center's interior walls. This key is mainly used by Orion (Super Megaforce Silver) who uses it to fight as Ranger Gold.

Orion can also merge the Ranger Gold Key with the Ranger Silver Key to create the fused RPM Gold/Silver Key with two Sky Morphers and two Cloud Hatchets at the same time.

Ranger Gold is one of the Rangers that represent the Ranger Operators for the RPM Dino Charger, released as part of Dino Charger Power Pack Series 3 with each charger depicting four pictures. In RPM's case, it featured Ranger Red, Ranger Gold, the High Octane Megazord, and the RPM title. This Charger was paired with the Dino Thunder Dino Charger.

The RPM Gold Ninja Power Star is a special Ninja Power Star that bears the likeness of Ranger Gold and is marked with the kanji for "gold". This star is exclusive to the Super Ninja Steel toyline.