Gekisou Sentai Carranger: Zenkai! Racer Senshi (激走戦隊カーレンジャー 全開!レーサー戦士, Gekisō Sentai Kārenjā Zenkai! Rēsā Senshi) is the licensed video game of the Carranger series. It was released in Japan by Bandai in 1996, and required the Sufami Turbo accessory. Despite the fact that Carranger was adapted into Power Rangers: Turbo, the game was never brought to the U.S.

The RV Mechas have been dismantled and their parts scattered all around, so it is up to the Carrangers to collect all the parts required to rebuild them, all the while fighting the Bowzock gang. The parts appear in the form of cogs and gears, and can only be obtained by striking various objects and killing off Wumpers along the way, among other forms (finding and getting an engine, for example, will give off ten parts). Each Mecha requires 50 parts to be rebuilt.

"The Bowzocks have been defeated, but RV Robo is needed to defeat the giant Gynamo!! Gather the hidden parts in your next try!! Save the Earth with RV Robo!!" 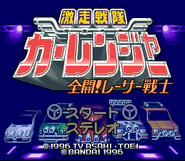 Game Menu. Note that it only has two options, Start Game and Sound Output (configured to Stereo by default). 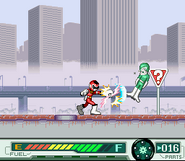 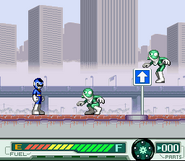