The Gatekeepers are stone warriors who protected the Ninjetti temple on Phaedos.

The four Gatekeepers, with a row of three along the bottom, and a fourth above the central lower one, were as follows

They are situated inside the walls of the Temple of the Great Power, with their armor and weapons cast in stone. When a challenger approaches, the stone armor and weapons are replaced with steel ones, and the rock monsters come to life.

The Rangers initially struggled against the rock monsters, but soon realized their weak point: Their brains. Using that, they quickly defeated the rock monsters and claimed the Great Power for themselves. 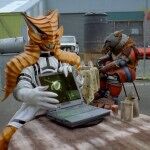 An alien with the head of a Gatekeeper and the arms and legs of Dragontron as seen near Tomars in "Boom."
Community content is available under CC-BY-SA unless otherwise noted.
Advertisement