Garbage Mouth is a garbage-themed lizard monster created by Finster .

His job was to capture Kat but she was able to get free by stomping on his foot. Garbage Mouth could project exploding energy blobs at his enemies. He had a trash can that could blow out smoke. It was destroyed by the Shogun Megazord.

Garbage Mouth is among the monsters that attend Master Vile's End of the World party. 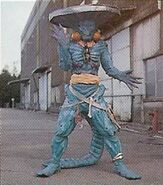 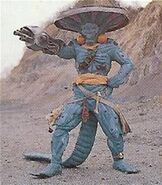 When Garbage Mouth was accompanying Professor Longnose into fighting the Aquitar Rangers, his right forearm was replaced with a laser cannon.