Gamma Vile is a planet in the M51 Galaxy where Master Vile resided in his fortress.

It is a rocky and desolate world of purple skies where three silvery moons (perhaps artificial) are in orbit. His fortress is built on top of a road that spirals up to its front gate and is guarded by various dragon-men and goat-men in red uniforms. With Friends Like These

After the Aquitar Rangers defeated Professor Longnose, Master Vile threw a tantrum and returned to Gamma Vile.Alien Rangers of Aquitar

Rita Repulsa and Lord Zedd used Serpentera to carry Squatt, Baboo, Finster, and the Tenga Warriors to Gamma Vile to live with Master Vile after the Machine Empire attacked their home.A Zeo Beginning

Arriving at Gamma Vile, the Machine Empire attacks Master Vile's fortress. Master Vile suspects that "that no-good son-in-law of mine" is the reason for all the chaos and demands that Lord Zedd and Rita Repulsa be brought to him so they can explain. The pair seem to know nothing about what's going on. Master Vile receives a holographic message from Klank and Orbus demanding that Lord Zedd be surrendered to the Machine Empire, as they have reason to believe that Zedd is experimenting with unknown energies in order to destroy King Mondo and take back control. Vile is fully willing to get rid of Zedd despite Rita begging him not to, but Zedd insists that he has a way to drive back their attack. This causes Master Vile to contact Zordon into sending the Power Rangers to Gamma Vile in order to drive away the Machine Empire. When the Zeo Rangers arrive on Gamma Vile, Tanya Sloan and Rocky DeSantos take off in Zeo-Fighter Jets to shoot down the Quadrafighters while Tommy Oliver, Katherine Hillard, and Adam Park deal with the Cogs on foot. Billy Cranston stays in the Zeo Megazord and pitches in by swatting down Quadrafighters as they are herded into range. Seeing the battle from above, Klank turns a pile of Cog scrap into a new monster named Scrap Heap, then fires Orbus out of a cannon to deliver a high-speed monster-enlargement. The Rangers regroup in the Zeo Megazord to deal with Scrap Heap as Zedd and Rita cheer them on (much to Rita's disbelief). Unnoticed by all, Klank and Orbus have escaped down to meet with Master Vile who is showing them to Zedd's secret lab where the Coin Energies are hidden. Klank agrees to call off the invasion in exchange for the Coin Energies just as soon as the Rangers are destroyed. Vile agrees as he just wants some peace and quiet, but he considers Klank's offer to destroy the Rangers as "a personal favor". The Zeo Rangers destroy Scrap Heap by catching one of his fired missiles and throwing it back at him, causing all of his stored missiles to explode and turn him back to scrap. They then confront Zedd and demand that the Coin Energies be given to them, but Master Vile appears and tells them all that Klank has already taken them back to King Mondo.With Friends Like These 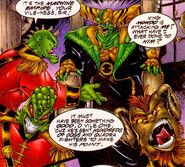 Master Vile with his dragon-men and goat-men minions.
Add a photo to this gallery
Retrieved from "https://powerrangers.fandom.com/wiki/Gamma_Vile?oldid=737810"
Community content is available under CC-BY-SA unless otherwise noted.