The Galaxy Megazord is the primary Megazord of the Power Rangers.

The normal weapons for the Galaxy Megazord are his Galaxy Megazord Saber which could charge up with white energy to perform a triple energy slash that was able to kill Gasser and take down Rocketron. His primary weapon, however, was the Condor Galactazord's body, used in the fashion of a crossbow as it's Condor Galactazord Missile Mode which could fire the Missile Launch attack. This made up the Megazord's primary finisher where he would summon the weapon and charge up the inside of his beak with green energy before firing a bolt to impale and obliterate the monster. The Galaxy Megazord can also be used in Power Rangers: Super Legends.

Team Cockpit
Add a photo to this gallery

They were found on an unnamed wild planet, captured by Scorpius' Stingwingers lead by a monster named Brunt, and imprisoned in large boxes. A fair distance from the planet, Maya heard the distressed call of the Wolf and other Galactabeasts on the Terra Venture. Against the warnings of Kai and Kendrix, she, Leo and Damon took the Astro Megaship out from Terra Venture's docking bay to the planet.

Maya devised a plan in which she would use herself as bait to draw Brunt and the Stingwingers away, allowing Leo and a reluctant Damon to free the animals. When she returned, they were ambushed by Brunt, who returned sooner than expected, forcing them to morph and fight. Kai and Kendrix arrive in time to fend Brunt off long enough to free the Galactabeasts. The Galactabeasts express their thanks to the Rangers and depart before reappearing on Terra Venture, the Lion Galactabeast finishing off Radster (Brunt's replacement after he failed). The Galactabeasts appear to have taken up residence on the colony afterward, responding to the call of the Rangers ("Galacabeasts, arise!") whenever they are needed individually or together.

The beasts never truly use their Megazord form until they are after turned to stone, a result of absorbing the noxious gases of Gasser, a monster who rendered all of Terra Venture unconscious for Furio to take control of the colony. As Gasser attacks the Galactabeasts, the Rangers utilize the energy from their Transdaggers to revive the fallen beasts. Their endeavor succeeds, reviving the Zords and transforming them into Galactazords, which allows them to transform into the Galaxy Megazord.

As opposed to words or thoughts, Galactabeasts communicate with their respective Rangers and each other through feelings, which allows Maya, and later, Leo, to speak to them in the sense that they use their hearts.

In the final events of Journey's End, the Galactabeast rescue both Mirinoi and the Rangers from certain death, when they transformed into the Galaxy Megazord of their own will and steered the battered central dome of Terra Venture away from the colonists into a nearby clearing. The colonists believed they perished in the explosion, only to be proven wrong a moment later when both the Zords and the Rangers emerged from the smoke, relatively unharmed. When Mirinoi is restored to its original state, the Galactabeast celebrate with fireworks.

From there on out, the Galacabeasts remained semi-active, following the Galaxy Rangers wherever they went, as seen in Trakeena's Revenge, when they are called into battle alongside the Omega Megazord to combat Trakeena's third and final mutated form (a direct result of a poison knife thrown into Trakeena's lifeforce concoction by Olympius) on Earth. The Galactabeasts presently reside on Mirinoi with the Galaxy Rangers. 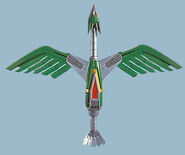 Condor Galactazord Missile Mode
Add a photo to this gallery

The Lion Galactabeast/Zord is controlled by Leo Corbett and has the power to fire blasts of flame. He forms the Galaxy Megazord's head and chest.

During the events of Forever Red, the Lion Galactabeast did not follow Leo to the moon on the mission to stop Serpentera's revival, most likely because he was not called upon or was asked to stay behind.

The Condor Galactabeast/Zord is controlled by Damon Henderson and has the power to create tornadoes. He forms the Galaxy Megazord's back, wings, waist, and crossbow.

The Gorilla Galactabeast/Zord is controlled by Kai Chen and has the power to fire jets of water. He forms the Galaxy Megazord's hips and legs.

The Wolf Galactabeast/Zord is controlled by Maya and has the power to fire blasts of lightning. He forms the Galaxy Megazord's left arm.

The Wildcat Galactabeast/Zord is controlled by Kendrix Morgan and later by Karone and has the power to fire flower-shaped energy bursts. She forms the Galaxy Megazord's right arm.

After the Rangers obtained the Lights of Orion, the Megazord was upgraded as well, gaining a chestplate in the form of a giant "V", as well as a new Galaxy Megazord Saber and ornate horns.

The Orion Galaxy Megazord has the ability to channel Leo's Galactic Fire Power as a weapon as shown with when he was used to destroy Grunchor. He can also fire small energy blasts from its hands as seen in Loyax' Last Battle when it destroyed the titular monster's mind control device.

In this form, the Megazord solely relied on his improved Galaxy Megazord Saber to fight though, in An Evil Game, the Condor Galactazord attack was used to destroy Kubak as the Rangers didn't use the power of the Lights of Orion in that particular battle. This was also used during Mean Wheels Mantis against the Motor Mantis. This attack was attempted with the Lights of Orion against Grunchor in the episode Grunchor on the Loose but had no effect on him.

The Megazord's primary finisher involves charging up the Galaxy Megazord Saber with golden energy to perform an almighty diagonal slash into the monster which would rip a line through them and cause them to disintegrate.

Retrieved from "https://powerrangers.fandom.com/wiki/Galaxy_Megazord?oldid=901839"
Community content is available under CC-BY-SA unless otherwise noted.