Gaku is 23 years old at the beginning of Gaoranger.

Gaku is a former Self Defense Force pilot. He was the first Gaoranger to be chosen who worked a year alone with only Tetomu. Tetomu recruited him during a flight mission, and he became missing in action. Because of this, he bleached his hair to become less recognizable. As a pilot, he is good at skydiving and English and his hobby is playing the ukulele. Gaku is the one who insisted that the Gaorangers refer to each other by color and not use their personal names. He is in charge of forming any leftover parts for the Gaorangers' mecha formations. After the final battle, he returned to the Air Force and his natural hair color.

A shadow-clone GaoYellow was created by Dorodoro's ninja powers as part of the Shade Rangers. The Gaorangers could not destroy these shadows without killing themselves in the process. After GaoRed used his Falcon Summoner to kill Dorodoro, the Shaderangers then disappeared.

Fifth Spear, Sargain disguised himself as Gaku as well as using his G-Phone to become GaoYellow along with four other Seven Dark Spears to make the Hurricanegers and Gouraigers believe the Gaorangers were evil.

Gaku, along with the other core Gaorangers got their powers stolen by the Space Ninja Group Jakanja and were held as hostage. His team was saved by the Hurricanegers, and got their powers back when Tsukumaro arrives.

Gaku's appearances in the "Versus Series", Gaoranger vs. Super Sentai and Hurricaneger vs. Gaoranger, are featured in the Super Sentai Versus Series Theater, hosted by the heroes of Tensou Sentai Goseiger. Moune (Gosei Yellow) also dresses as Gaku in the Gaoranger cosplay.

Years later, Gaku fought alongside not only his own team, but every single Sentai ranger in existence, against the Empire of Zangyack when it attacked the Earth in the Great Legend War. After fighting against hundreds of Gormin and their Zgormin commanders. AkaRenger noticed the fleet moving towards them, he gathered all the Rangers together and gave them the order to sacrifice their powers to wipe out the first invasion's armada. The GaoYellow powers are later used by Luka Millfy via the Ranger Keys.

After the Gokaigers defeated the Zangyack, Marvelous returned the Ranger Keys to their original owners. It is assumed Gaku and his team have their powers back.

Gaku, alongside his team (bar GaoSilver), among the majority of the Super Sentai heroes, was caught up in the "Super Hero Taisen" incident which eventually resulted in the Super Sentai teams and Kamen Riders joining forces to defeat both Dai-Zangyack and Dai-Shocker. During the final battle, he is seen fighting a Shocker Combatman.

GaoYellow appeared with his team among the first 38 Super Sentai whom collectively empowered Wild Tousai Shuriken King in its fight against the titanic Gillmarda, granting the Ninningers and Zyuohgers the power to perform the Zyuoh Ninnin Super Sentai Burst which destroyed Gillmarda with the combined power of all 40 Super Sentai.

Gaku joined the Super Sentai Strongest Battle as a member of Flying Team. It’s unknown whether he participated in any of the matches, but his team was eliminated after losing the second round against the Swordsman Team.

At first, Gaku was very serious and humorless, he was upset that Kakeru had been chosen as leader instead of him and he was demoted to second-in-command. As time went on, Gaku opened up, and became especially close to Kakeru, often teasing him good nature. He also has a tendency to speak in English with a clear Japanese accent still in his words.

Due to his Power Animal being a bird, Gaku refuses to eat bird meat. He seems to be the only one to have this tendency; neither Soutaro nor Kai have shown any problem eating cow meat and fish, respectively.

He can sprout yellow mechanical wings underneath his armpits to enable flight. 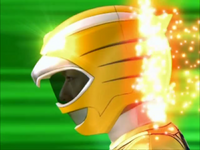 The GaoYellow Ranger Key (ガオイエローレンジャーキー, Gao Ierō Renjā Kī) is Gaku Washio's personal Ranger Key and what became of his powers after he along with the rest of the 34 Super Sentai sacrificed their powers to end the Great Legend War.

This key along with the majority of the Ranger Keys were collected by the Red Pirates and later used by the Gokaigers. The GaoYellow Ranger Key was mainly used by Luka Millfy (Gokai Yellow), who used it to fight as GaoYellow. It was also used by Captain Marvelous (Gokai Red) on one occasion.

The Gaoranger keys, along with all the Ranger Keys of the first 33 Super Sentai, were briefly taken by the Black Cross King and turned into Ranger puppets that were fought by the Gokaigers and the Goseigers. Splitting up, the puppet GaoYellow was defeated as part of a group of surviving Yellow warrior keys by Gokai Yellow and Super Gosei Yellow.

After Zangyack were finally defeated, the Gokaigers gave the Ranger Keys back to their rightful owners. Gaku received his key and became GaoYellow once more.

A female version of GaoYellow as seen in Gokaiger.

GaoYellow appears with his team in the Hyakujuu Sentai Gaoranger video game.

Gaku Washio/GaoYellow: to be added

GaoYellow is among the vast pantheon of Rangers which are available in the mobile game Super Sentai Battle Base.

GaoYellow appears with his team among all Sentai in the mobile game Super Sentai Legend Wars.