Gaisoulg (ガイソーグ, Gaisōgu)[1] is a set of purple knight armor which developed its own evil sentience, and later became an enemy of the Ryusoulgers.

Later, the armor was purified thanks to Jack-o'-lantern Minosaur's power and put under the ownership of Nada.

According to Bamba, Gaisoulg was created by the RyuSoul Tribe to fight the Druidon, however at some point the armor developed it's own consciousness. Ep. 21: Light and Dark Kishiryu Master Green would later don Gaisoulg's armor against some returning Druidons, but ultimately, the Armor found his weakness and managed to control him, causing him to attack his own village. Unable to deal with it, Master Green fled to outer space and died off, leaving Gaisoulg to wander the cosmos looking for a strong opponent. Eventually, he ended up on planet Nemesis. Ep. 30: Overthrow! High Spec

Nada, now under the identity of Gaisoulg, released Kishiryu DimeVolcano for Wizeru, however the Kishiryu was obtained by the Ryusoulgers first. The night after the Ryusoulgers defeated the Shen Minosaur, Gaisoulg met with Wizeru and Kureon mocking the first for allowing the Ryusoulgers to obtain DimeVolcano, which made Wizeru angry and had a small fight with him. Angrily Wizeru asks him why he didn’t got rid of the Ryusoulgers by himself which Gaisorg responded that it was pointless as Wizeru wanted "entertainment". Gaisoulg tells Wizeru that he's going to let him know if he finds something interesting before leaving. Ep. 12: Scorching Illusion

Gaisoulg made its way to the Ryusoulgers while the latter were fighting Gachireus and Jack-o'-lantern Minosaur,the Druidon Tribe members retreats as Gaisoulg rampages on site. Suddently, Towa use DoshinSoul to weaken Nada's body as a mean to force Gaisoulg to switch a new host, and Melt suggests to use the Minosaur's rainbow rain to accelerate the process to exhaust Gaisoulg's hated. Gaisoulg attempted to take Koh as its new host but was blocked by the Ryusoulgers and its hatred was expelled by the rainbow rain, relieving Nada and Koh.

These people used the armor and unlike the hosts, they have full control over it or they still have control over their actions prior to the armor's purification. The armor is currently under the permanent ownership of Nada. 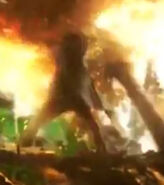 Nada Ep. 29: Canalo's Marriage (owner as of episode 32)
Add a photo to this gallery

Retrieved from "https://powerrangers.fandom.com/wiki/Gaisoulg?oldid=836463"
Community content is available under CC-BY-SA unless otherwise noted.