Futagawara (フタガワラ, Futagawara, 35) is a gluttonous Ayakashi who serves under Akumaro, capable of consuming objects with his hands. The hands can also be used as an offensive attack.

Sent to the mortal realm, Futagawara eats everything in sight, including Ryunosuke's Shodo Phone. By the time he gets full, Futagawara is killed by Juzo Fuwa and Dayu Usukawa in order for Akumaro's plan to be completed with the Ayakashi showing his true power. But before he dies, Shinken Red slices his arm in order to give Ryunosuke his Shodo Phone back.

Once in his second life, Futagawara's arms are converted into a two halves of a nearly impenetrable wall with a face whose eyes shoot beams. He manages to withstand DaiKaiShinkenOh's attacks before being destroyed once and for all by SamuraiHaOh, after destroying the wall and then using the Mojikara Great Shot Circle.

According to folklore, the nurikabe (塗壁, nurikabe) is a yokai that takes the form of an invisible wall. It seems that the appearance of Futagawara's second form is the basis of this legend. 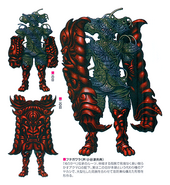