It possesses abilities similar to that of a frog such as high leaping and an electronic tongue; it also has a hole in its huge mouth which distribute's Gear's devil fungus to kill anyone infected by it and possesses a large cannon in said mouth.

Frog Canth is the main means of the distribution of a fungus created by Gear that infects anyone that breathes it in; further whenever any treatment is used to cure it, Gear takes it back in so Doctor Man can strengthen the disease in hopes of making it uncurable. After discovering a flower that can stop the fungus' infection, Hikaru with the support of Jun defend the finding and then install it into a missile fired into the Mecha-Gigan's exhaust pipe, stopping the virus. With the monster's primary attack disabled, Bio Robo destroys the Mecha Gigan with Super Maser Concentration.

Frog Canth is one of four Mecha Gigan brought back by Ghost Canth to fight Bioman until they figure out the mystery of its illusion abilities. 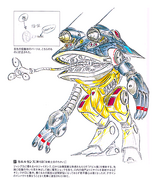 Frog Canth Concept Art
Add a photo to this gallery

Retrieved from "https://powerrangers.fandom.com/wiki/Frog_Canth?oldid=1036462"
Community content is available under CC-BY-SA unless otherwise noted.