The Anomalogaris played a big part in the 200 Days of Darkness that turned Dino Earth into a barren desert world.

The first Anomalogaris arrived on Earth piloted by Apostle of Darkness Geilton, only to be destroyed by Abaren Oh.

The Anomalogaris II (アノマロガリス二世 Anomarogarisu Nisei, 31 & 32) piloted by Apostle of Destruction Jeanne arrived with the Unstoppable Connection Living Ship Barugigenia. It soon self-destructed after Jeanne destroyed the controls during her final fight with Asuka, though both occupants survived (though Asuka was initially believed to be dead until it was confirmed he took back the Armor of Darkness before Anomalogaris was destroyed.

The Anomalogaris was designed by Keiichi Sato. It is based on the anomalocaris. 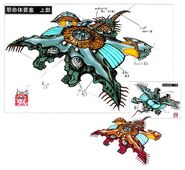