Flynn McAllistair is Ranger Operator Series Blue, alternately referred to as Ranger Blue, and is second-in-command of the Ranger Operators. His operation number is two.

Retroactively, he is also referred to as the RPM Blue Ranger or Blue RPM Ranger, though these are in reference to the show, as opposed to proper labels.

While Flynn was a mechanic by trade, a skill taught to him by his father, Flynn expressed a strong desire to help others like the superheroes in the comic books he frequently read as a child. However, more often than not, it would get him in trouble. His father didn't approve of his son's wish to save people, who believed and insisted there was no such thing as superheroes. Despite this, Flynn remained true to what he believed and what he knew he wanted to do: help people. After graduating from high school, he finally got that chance to do what he always wished to. Not realizing the full responsibilities that came along with such line of work, his passion for helping others tended to get in the way, as he usually overdid his jobs (ex. arresting the mayor's son, spraying a burning building to the point of unnecessary water damage, and then wanting to go back into the said building to save the plants) and was subsequently fired from all of them.

As soon as Venjix attacked, both he and his father fled to Corinth, but Flynn, seeing that there were still many people who had yet to make it into the domed city, went back outside to save a busload of people. With his skills, he eventually made it unharmed back to Corinth. His actions finally impressed his father, who now wholeheartedly supports and is proud of his son.

Flynn's dream of becoming a true superhero finally came true when he was selected to become Ranger Operator Series Blue.

Dillon and Ziggy's arrival resulted in feelings of distrust from Flynn, due to the nature of Dillon's mechanical upgrades, but Flynn was still less antagonistic than Scott over the matter, willing to allow Dillon on-board if the group consensus felt it was best. Ziggy joining the team produced quite a bit more incredulity in him, however. Despite any initial feelings of doubt, he seems to have since fully embraced the two as official members of the team.

Later when all the Zords are trashed, he and Gemma create the Road Attack Zord.

After his tenure as a Ranger is done and Venjix is destroyed, he opens up a shop with his dad, and says that they are going to create new computer networks for the Corinth.

Flynn along with the other Ranger Operators and other Ranger teams are seen in Troy's premonition about the Legendary Battle.

After that the Mega Rangers meet Robo Knight, Flynn is seen in a flashback when Troy relates his visions about the Legendary Battle.

Emperor Mavro was defeated, but the remaining thousands of X Borgs still stand. Tommy gathered all the existing Power Rangers, Flynn returned with his fellow Ranger Operators as part of the army of Legendary Rangers led by Tommy that helped the Mega Rangers to defeat the Armada once and for all, fighting in a huge battle against hundreds of X Borgs and dozens of Bruisers. After the demise of the X-Borgs, Tommy shook hands with Troy and teleported off along with Flynn and the Legendary Rangers. He then returns to his home dimension in the RPM World.

During his research in the Ranger archives,Devon Daniels finds information of the Ranger Operators in another dimension and sees a picture of Summer and his team with Doctor K.

Upon learning Venjix has returned under his reborn alias of Evox in the dimension where the Beast Morphers live, Doctor K provides her assistance to get to make up for his mistakes and tells the story of her and the Ranger Operator while flashbacks of Scott, Summer and Flynn appear.

When events set into motion by Lord Drakkon caused the timeline to split into pocket universe, each anchored on a powerset. The Ranger Operators were split off into their own pocket universe. On Doctor K's birthday, he and the other Ranger Operators give a cake to Doctor K. However, Flynn and the other Rangers are screamed at by Doctor K due to the traumas that she had in her childhood.

In Corinth, Flynn along with the other Ranger Operators and the military defend the frontier of Corinth city, fighting against more Rangers Sentries. Flynn attacks a Blue Samurai Sentries, he along with the Rangers, little by little are getting tired during the battle until the Tyrannosaurus Dinozord drove by Jason and Lauren to help them, causing a brief retreat of the Ranger Sentries.

Teleported to the Command Center

During another fight in Corinth against Lord Drakkon's Forces, Flynn fights against a Sabertooth Sentries and Green Zeo Sentries, he with Scott and Summer are surrounded by several Sabertooth Sentries but are saved by Lauren. Continuing the fight, Flynn is seen fighting against A-Squad Green Ranger, until they came face to face with Drakkon. All the Rangers decided to attack Drakkon but are easily defeated by Drakkon himself. Flynn and the other Rangers witness that Drakkon stole Summers the Morpher. Fortunately, reinforcements arrived to help the Rangers are other Ranger survivors rescued by Time Force Pink and Mighty Morphin Pink Ranger from other timelines. However, he goes to the Command Center alongside the other Rangers and Doctor K.

After being teleported in the Command Center, Flynn is seen interacting with his fellow Ranger Operators Scott and Dillon.

Flynn along with the other Rangers Morphers upgraded by Doctor K, he prepared among other Rangers to teleport on the Moon of the World of the Coinless for the fight against Drakkon and against his Ranger Sentries.

Flynn is seen briefly in Tommy Oliver's vision when an alternate Kimberly aim a Green Chaos Crystal thrown at him.

Flynn's timeline was later restored by the Mighty Morphin Rangers after they defeated Drakkon.

Flynn as Ranger Operator Series Blue along with Scott, Summer and other several Rangers are seen in Jason Lee Scott's flashback and vision to the battle on the Moon of Shattered Grid. Flynn is seen fighting against Mastodon Sentries.

Flynn, Scott and Summer are seen briefly in a fragment of the reality when the Emissaries Three observes all the Ranger realities.

In the timeline of the World of the Coinless, Lord Drakkon himself tortures the Mysterious Prisoner Ranger. Drakkon reveals to his prisoner some Ranger realities. The first reality is the Dino Charge World of the Dino Charge Rangers are seen fighting against Vivix. The second reality is the RPM World, where Flynn and the other Ranger Operators are seen fighting against Grinders.

Flynn along with the other Ranger Operators are among all the Ranger teams which appear in the Korean-developed mobile game Power Rangers Dash.

Speaking with a Scottish accent, Flynn is generally laid-back in personality, and is a fairly agreeable person. As a mechanic, he often spends time working on his personal vehicle, a Hummer H1, and is proficient at making smoothies, which seem to be a hobby for him. He uses his general knowledge of machinery and appliances to help out with analyzing Ranger tech and, even once rivaling Doctor K's understanding of the Ranger technology, as well as creating an entirely new Zord with Gemma's assistance. He also appears to be very skillful at driving and handling heavy-duty vehicles, as evidenced by his bus driving skills, his truck, and his big-rig inspired Zord.

Episodes when he uses his time freeze ability: 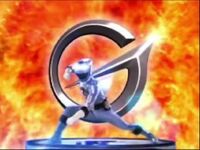 The Ranger Operator Series Blue Ranger Key is Flynn's personal Ranger Key. This key along with the majority of the Core Ranger Keys are seen lining the Command Center's interior walls. This key is mainly used by Noah Carver (Super Megaforce Blue) who uses it to fight as Ranger Blue.