Flame Head is a masked horse-riding flame monster created by Lord Zedd. He served as the primary antagonist of the episode "Where There's Smoke, There's Fire".

Flame Head was created by Lord Zedd. Zedd sent this very powerful monster to Rangers with an ultimatum: unless they submit to Lord Zedd's rule, Flame Head will burn down all of Angel Grove. The Rangers, of course, refuse and decide to battle the monster. Flame Head could fire the fire from his mouth. He also could strike the ground with his sword and make very powerful flame attacks. After the brief fight with superheroes, he took off his mask and became more powerful. The Rangers combine their powers and create a shield which absorbed the fire of the Flame Head. Then Zedd enlarges the monster but he is destroyed by the Thunder Megazord with its Thunder Saber.

Flame Head was ruthless and destructive monster. He spoke with a feminine echoing voice. He enjoyed setting things on fire and destroying everything in his path. He was a skilled and strong fighter. He was also one of the most dangerous and formidable monsters of Zedd. Though, the Rangers had to combine their abilities to have victory over him.

Flame Head with his Mask on 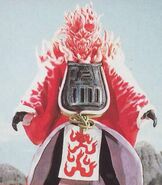 Giant Flame Head without his mask

Flame Head on his pet horse