Finster 5 was a cyborg version of Finster from the World of the Coinless. As Finster, he followed his counterpart's original timeline until the Green Ranger still chose to side with evil. His body's cyborg parts are made up of the cannibalized parts of Alpha 5. He was slain by Lord Drakkon during the final battle of the Power Rangers, but was revived after Shattered Grid was undone.

He is the former second-in-command of Lord Drakkon that aligns himself with Commander Scorpina after she takes control of Lord Drakkon’s Army. Finster 5 would later reveal that he has turned Lord Zedd into a mindless cyborg after combining his body with pieces of the Dragonzord. Finster 5 would temporarily obtain a new form after the former Mighty Morphin’ Power Rangers use their Power Coins to power up the entire population with Morphin’ Grid energy. 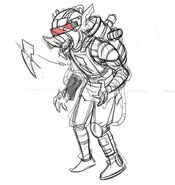