For the original TV version of this character, see Farkas Bulkmeier.

Farkas "Bulk" Bulkmeier is a classmate of the Power Rangers and one of the resident troublemakers at Angel Grove High School alongside his best friend Eugene "Skull" Skullovitch.

Bulk is a student at Angel Grove High School. He is known for being a bit of a bully and a Ranger fanatic, hosting the web series: Ranger Station, where he interviews classmates about the Power Ranger battles they witness.

When Rita Repulsa successfully has her monster trap the Power Rangers into its body, Zordon temporarily recruited Bulk and Skull to be Power Rangers using 'extremely rare' Power Coins. After they successfully defeat the monster, Alpha 5 removes their memories as no one must ever know they were ever Power Rangers. 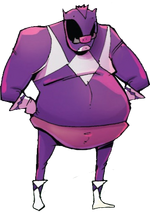 Retrieved from "https://powerrangers.fandom.com/wiki/Farkas_Bulkmeier/2016_comic?oldid=824206"
Community content is available under CC-BY-SA unless otherwise noted.