The fake GokaiOh is an evil imitation of GokaiOh with a larger hat, an eye patch, a traditional "skull and crossbone" jolly roger, a cape and a large hook in place of the left hand. In addition to two Gokai Ken swords, Fake GokaiOh is armed with a cannon on its left arm and a laser beam on its eye patch. Its main cannon is larger than GokaiOh's Gokai Hō and has five smaller cannons around it. This mode initiated an unnamed finisher where the skull heads would open, charges up with blue energy, and then rapid fire missiles. Since this was going to be how Los Dark planned on kill the Gokaigers, this was its strongest attack although it had no effect on the backup mecha. While it appears to have component mecha similar to GokaiOh, it never separates into any other mecha.

Los Dark created the fake GokaiOh to lure the Gokaigers into his Ghost Ship. He does this by appearing in the middle of the city and battling Gai Ikari and GoZyuJin.

Los Dark later piloted the fake GokaiOh against the Gokaigers in their final battle. After a lengthy duel which destroys his ship, he is defeated by the Gokaigers when they summon Variblune, Pat Striker, Dragon Headder, MagiDragon and GekiTiger to ram into the copy, destroying the cannon in the process. The damaged robo stumbled, getting it to fall into the skull's mouth on the bow of the ship, down into the exploding ship. It exploded while its captain lamented on Hell's call for him, soon followed by the destruction of the Ghost Ship. 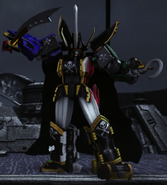