I, Eye Guy
Island of Illusion
The Wedding
Countdown to Destruction
The Fate Of Lightspeed Pt. 2

The Eye Guy is an eye themed monster, created by Finster who served as the main antagonist of the episode "I, Eye Guy."

The Eye Guy was created by Finster and Rita had once employed Eye Guy's skills on Redna 2 to capture incredibly bright children to use their intelligence for evil. The Eye Guy could absorb human intelligence, fire energy eyes from his body and recreate his body after any attack due to being made from eye balls. The Eye Guy was one of Rita's favorite monsters and Eye Guy seemed to show some attraction and loyalty to her, calling her "lovely" and "a sight for sore eyes". Eye Guy had an array of energy beam attacks he could launch from his various eyes, and could reassemble himself if blown apart as long as his main eye remained undamaged. Eye Guy's mission was to capture a highly-intelligent child so Rita Repulsa could absorb their intelligence. Eye Guy captured Billy's friend Willie and was challenged by the Power Rangers. Eye Guy proved to be invulnerable to their Power Blaster and had them on the ropes until Billy destroyed his main eye. Grown to giant size by Rita, the Eye Guy was destroyed by the Megazord, freeing the child before Rita Repulsa could get to him.

Some time later when the Rangers were sent to the Island of Illusion, they were assaulted by the illusions of monsters they had already defeated which then vanished when they were very near to the Rangers. One of these illusions was Eye Guy.

The Eye Guy was later recreated by Finster to attack the Rangers at the Spectre Theater. He later attended Rita and Lord Zedd's wedding, bringing a caged spider for "either a decoration or a light snack." After the reception, he was part of the monster army that fought and was destroyed by the Thunderzords.

Three years later, Eye Guy joined King Mondo and the Machine Empire as one of the many monsters that aided the Empire in the raid on the Phantom Ranger's home planet in the United Alliance of Evil's invasion of the universe. When Zordon's Energy Wave washed over the planet, Eye Guy, along with the rest of the forces, was destroyed and reduced to dust.

The Eye Guy is an evil, cruel, sinister, villainous, devious, cold, psychopathic and a calculating monster. He is very loyal to Rita and is ready to do anything for her. He is also very spiteful, vicious, despotic, unscrupulous, malevolent, and ruthless. He is also very sadistic, because takes pleasure of kidnapping children. Towards the Rangers, he is unsympathetic and hateful. Towards his own allies, Eye Guy is charismatic, helpful, and protective. Rita cared about him and he was her favorite monster. Towards her he shows his lovely side. He also is shown to have a comedic side. 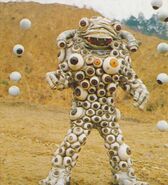 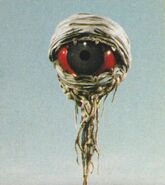