Task 33: The Sun of Lemuria

A new type of Great Evil Dragon created by combining Ryuuwon's best genetic modification technology and the Questers' Gordom Engine technology, Grand is the ultimate cyborg battleship. Armed with laser cannons, can build temporary barriers and capable of unleashing unlimited number of Zorads. Its "Grand Blaster" can neutralize Ultimate DaiBouken's Ultimate Blaster. All these features make the Gordom Engine insufficient to mobilize it, being "The Sun of Lemuria" the only energy source powerful enough to make it fully operational. In a first attack, Grand's tremendous power made Ultimate Daibouken disassemble. However, after GoGo Voyager appears and destroys the entire fleet of Zorads, the energy given by "The Sun of Lemuria" ran off and had to retreat. After recharging in Task 34, Grand attacks again but is greatly overpowered by the just formed DaiVoyager and destroyed with the Adventure Double Screw. 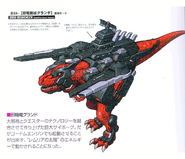