Retroactively, he is also referred to as the Dino Thunder Blue Ranger or Blue Dino Thunder Ranger, though these are in reference to the show, as opposed to proper labels.

Ethan is the group nerd, often found on the computer or playing video games. But he is also very smart and sarcastic and isn't afraid to stand up for himself when pushed. During the season finale, he asks out Angela, a pretty girl he meets in line for the latest sci-fi film and takes her to the school dance. Playing into the fact that the entire Dino Thunder season was an homage to the original Mighty Morphin Power Rangers, Ethan shares some similarities with former Power Ranger Billy Cranston, they are both Blue Rangers, considered computer geeks, and they both have Zords modeled after Triceratops.

By the year 2025, Ethan has developed the technology that S.P.D. currently uses.

Ethan was a skilled hacker and computer expert at Reefside High School, whose pranks got him in trouble with Principal Randall. While serving detention with two other students (Conner McKnight and Kira Ford) under the new science teacher, Dr. Thomas Oliver, Ethan found a Dino Gem and gained superhuman powers. He found that he could make his skin impenetrable.

Eventually, he also learned how to morph into the Blue Dino Ranger. He controlled the Tricerazord (and for a short time the Stegazord), and used the Tricera Shield. He also piloted the Mezodon Megazord in its final battle.

Ethan is an avid gamer. One time, he was cheating at a game, trying to get the secret code, and a monster zapped him into it. There he met Beldorf, a wizard in the game. Ethan escaped from the game and learned that you have to be cautious at all times when you're a Power Ranger.

Ethan was the third Dino Ranger to unlock his Super Dino Mode. He unlocked it during a battle with the White Drago Ranger, Trent Fernandez. Trent had defeated Kira and was on the verge of killing her, when Ethan and Conner went into Super Dino Mode and defeated him.

Another time, a strange meteor crashed on Earth. The meteor had the power to release a side of yourself that was usually hidden. For Ethan, it was a competitive side that came out, as he was seen being a workfiend and acting like an airhead (much like Conner McKnight.)

Ethan also had trouble with a bully at school, Derrick, who was frustrated about his abilities in soccer, so he took out his frustrations on Ethan. Ethan wasn't afraid to stand up for himself, but he also knew that there were better ways to deal with a bully. Ethan used his computer to show the bully what was wrong with his kicking on a virtual 3D video. It worked, and the issue was resolved.

When Trent returned to the side of good, Ethan had a little trouble trusting him, but eventually learned to trust him.

Ethan also developed a relationship with Cassidy Cornell, using an internet on-line dating service. Ethan learned that while Cassidy was a good person, she was just insecure. He helped her to be nicer to people, though. In the end, because of Cassidy's constant reporter duties and Ethan's Power Ranger duties (unknown to Cassidy at the time), Ethan and Cassidy decided to be friends.

Ethan was visiting a museum one day, when he saw Egyptian hieroglyphics. He decided to translate them and ended up being cursed. Though he didn't believe it at first, after a series of unfortunate events, he learned it was real. Kira went to the museum to get the rest of the hieroglyphics to learn to break the curse. This brought Tutenhawken to life as he attacked the city. Kira brought the writings back and they learned that only in the air Tutenhawken could be defeated and the curse broken. Ethan used his brand new Hovercraft Cycle that Hayley built to defeat him.

Ethan also learned to be humble and deferential. There was a video game competition going on at Hayley's Cyberspace, and Ethan wasn't practicing. He won the tournament from last year and believed that he didn't need to practice. Ethan's impolite cockiness cost him the tournament title though, as he took second place to Cassidy's cameraman and friend, Devin Del Valle.

In A Test of Trust, Ethan, Conner, and Kira reflected on their first year as Power Rangers. They were talking about Ethan, and they decided that Ethan's reputation was definitely a lot better than it was before.

In the final battle against Mesogog, the five Dino Rangers pool all of their power into one final attack to destroy Mesomonster. While the attack is successful, it sapped all of the power from the Dino Gems, leaving only Ethan's Tricera Skin power intact. He goes to the prom with a girl named Angela. 20 years later, Ethan will have created new technological equipment that is used by the Power Rangers S.P.D.

In the year 2025, a criminal named Broodwing purchased the Red, Blue, and Yellow Dino Gems on the planet Onyx. At his one year High School reunion, in the year 2005, Conner, Ethan, and Kira were brought to the future by Broodwing, in the hopes that Broodwing and the Dino Rangers would form an alliance against Space Patrol Delta and Emperor Gruumm. Conner, Kira, and himself met up with the S.P.D. Rangers. Though their battles are legendary, they had to prove to Anubis Cruger and the other S.P.D. Rangers their true courage. Conner and the other Dino Rangers helped the B-Squad Rangers defeat Emperor Gruumm's largest Krybot army. Ethan and the other Dino Rangers used the Z-Rex Blaster on Gruumm, which forced him to retreat. The Dino Rangers offered to stay but can't due to them having to continue their lives in the past. They are told that Conner established a large chain of soccer camps across the country, Kira became a huge singing sensation, and Ethan ended up developing some software that they still use at S.P.D. After this, they were returned to the year 2005, having forgotten the whole incident, because Dr. Kat Manx erased their memories of it. Later, Ethan appears again when Gruumm comes to the past and teams up with Zeltrax. After helping his teammates and the SPD Rangers defeat Grumm and Zeltrax, his memory is once again erased.

Ethan returned with his fellow Dino Rangers, while Dr. O fought with his old team as the Green Mighty Morphin Power Ranger, as part of the army of Legendary Rangers that helped the Mega Rangers defeat the Armada once and for all, fighting in a huge battle against hundreds of X Borgs and dozens of Bruisers.

Ethan was one of the Rangers that responded to Jason's signal and returned alongside his fellow Dino Rangers as part of the Legendary Dino Rangers army, fighting against an army and defeating Snide. When Evox summoned his massive Chimerazord, his team joined in summoning the Thundersaurus Megazord and aiding in its defeat. With Evox on the run again, the teams departed, with Ethan and the rest of his team being happy to return to Reefside.

When events set into motion by Lord Drakkon caused the timeline to split into pocket universe, each anchored on a powerset, the Dino Rangers were split off into their own pocket universe. Lord Drakkon then attacked them. He was seen attempting to fend off the Ranger Sentries. His Dino Morpher was later seen at Drakkon's lair, concluding that he may been captured by Lord Drakkon.

When the timeline was restored, so was Ethan.

Ethan along the other Dino Rangers are among all the Ranger teams which appear in the Korean-developed mobile game Power Rangers Dash. 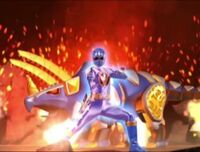