Eric Myers is the Quantum Ranger, the sixth Ranger of the Time Force Rangers.

As a Silver Guardian

Eric was first seen as a soldier working for the Silver Guardians, an organization established by Wesley Collins' father in order to protect the Silver Hills. Wes later revealed that they attended the same private school. Whereas Wes came from a rich family, Eric worked hard and was dirt poor, and eventually decided to leave the school, saying he had "bigger plans". Eric was resentful for having to work so hard and was looked down on by the snobbier students while Wes did not have to work at all. From this, Eric grew bitter and had few friends. Wes was one of the few people who didn't look down on Eric because of his background and tried to befriend Eric on several occasions, to no avail. Despite this, Eric had some sense of pride and nobility because he didn't take advantage of Wes' kindness, but more of wanting absolutely nothing to do with Wes.

After discovering that Wes was the Red Time Force Ranger, Eric attempted to find his own powers. He became aware that the Time Force Rangers are looking for the Quantum powers, and he got to it first and forcibly became the Quantum Ranger, much to the displeasure of Wes' teammates. Eric then entered a 3-way struggle with the other Rangers and Ransik to gain control of the Q-Rex, and he prevailed, assuming control of the most powerful Zord in the Time Force arsenal.

Eric became a reluctant ally to the regular Rangers, remaining separate and occasionally aiding them at certain times. During the end of the series, Eric was wounded by a blast from a Cyclobot, and he handed his morpher over to Wes to use the Q-Rex. Wes was able to use the Quantum Defender and Q-Rex to great effect thanks to this. He recovered though and Wes gave him back his morpher, turning over a new leaf, establishing friendships and turning from anti-hero to hero. When the Rangers departed for the future, Mr. Collins offered Wes command of the Silver Guardians , who would now protect the city from evil for free and Wes accepted on the condition that a surprised Eric be his partner.

Wes and Eric have become best friends during their duty as Silver Guardians, he is seen giving Taylor Earhardt a ticket for speeding a car. After writing her up, Eric and Wes talked about Taylor being the type of troubled girl. The next morning, Eric, Wes, and the Silver Guardians receive a disturbance call from Cranston Plaza, he and Wes battle against the Mut-Orgs in their Rangers Forms, but are easily defeated Eric thought that the all mutant they were sent to the future, but before the Mut-Orgs can finish them off, the Wild Force Rangers arrive, however, the Mut-Orgs escape. Eric is recognized as the police that give her ticket and is scolded by her.

The other rangers calm the situation, Eric and Wes are confused by the word Orgs by part of the Wild Force Rangers, they decide contact Trip from the future, aware that the Mut-Orgs are fugitives from the year 3001 and the strange disappearance to Jen, Eric and Wes decide work in team with the Wild Force Rangers, they decide have a battle in team against the Mut-Orgs but are brutally defeated by they until Jen appears in his rescue.

TV STORY-Reinforcements from the Future, Pt. 1]

back in the Animariun, Eric and the other Rangers heard Circuit's call from the future, listening that the other Time Force Rangers returned to the past, the Time Force Rangers have a reunion after much time until Ransik and Nadira appears, in the Animariun Eric like the other Rangers found out that Ransik created the Mut-Orgs, when the Time Force Rangers spend the night at the Animarium, During this time, he developed a love-hate relationship with Taylor Earhardt resulting that they will get to know a little more, the next day Eric along with the time force Rangers, Wild Force Rangers, Nadira and Ransik go to the power plant and divide into groups, Eric goes with Taylor and Katie in the reactor room, where they fight the Putrids to give Trip time to shut down the reactor. He allowed Taylor to use his Quantum Defender and destroy the reactor

Soon, all the Rangers gather to face the Mut-Orgs. Eric and Merrick Baliton in their Ranger forms defeat a Putrid Army, Eric using his Mega battle and the other Time Force Rangers, the Wild Force Rangers are regrouped by the Red Rangers with their battlizers attacking with the Chrono Blsters and Crystal sabers destroy the Mut-Orgs. battle now won, the Rangers rush back to Ransik and Nadira, Eric liked the other Rangers to witness Ransik's retention, They all return to the Animarium for a picnic.

TV STORY-Reinforcements from the Future, Pt. 2]

Sometime after Wes and Eric were called by Tommy Oliver to team up with the previous Red Rangers to fight against the remnants of the Machine Empire, Eric team up with Aurico, where both destroyed Tezzla and also he among the other Red Rangers are witnesses of how Cole destroys General Venjix and Serpentera, during which he jokingly bemoaned the fact that his Q-Rex Zord could easily defeat his Dragonzord.

The Quantum Ranger was featured in a chronicle of Power Ranger history compiled by Tommy Oliver shortly after he formed the Dino Rangers, which was found by the nascent Ranger team in the Dino Lab.

After an alien from Andresia named Orion came across a Silver Ranger Key and a Morpher, Orion got visions from multiples sixth Rangers while touching the morpher.

TV STORY-Silver Lining Orion would call out the power of all the sixth ranger, including Eric, in order to create the Super Megaforce Gold key.

Eric returned with his fellow Time Force Rangers as part of the army of Legendary Rangers that helped the Mega Rangers defeat the Armada once and for all, fighting in a huge battle against hundreds of X Borgs and dozens of Bruisers.

Sins of the Future

When events set into motion by Lord Drakkon caused the timeline to split into pocket universe, each anchored on a powerset, the Time Force Rangers were split off into their own pocket universe. Quantum Ranger eventually received Zordon's call through the Morphin Grid and was among numerous Rangers who rallied to his pocket dimension for the last stand against Lord Drakkon, reuniting with Jen.

At the same time of Southworth’s reprisal and his Battle for the Grid’s release date, Eric is also a useable character in Power Rangers Legacy Wars. He is the third member of his respetive team to be released. He is the 25th 6th/extra ranger character to be released,he is a Legendary (Leader), Legendary (Assist) character,and represents Time Force Rangers with Jen and Wes.

Battle for The Grid

Eric Myers is a playable character in Power Rangers: Battle for the Grid. He uses his Quantum Defender primarily as his weapon.

When he was first introduced, Eric was very bitter and hateful, wanting to top Wes because of their different backgrounds, which is quite odd as Wes showed he wanted nothing more than to be genuine friends with him, despite their backgrounds; Wes turned down a party with a rich kid, wanting to hang out with Eric instead. As Eric put it from his point of view "[Wes] has all the money and connections; he just didn't know how to use them." It's likely that Eric was annoyed with Wes's laid back attitude, as he effectively treated everything, mainly school and life, like it wasn't a big deal, a luxury his wealth afforded him while Eric had to work extremely hard to reach a similar position.

As the series progressed, however, Eric warmed up to being with the Time Force Rangers. By the end of the series, he was not bitter toward Wes for taking over his position as leader of the Silver Guardians and they became real, genuine friends from their time as partners. 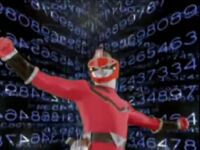 The Quantum Ranger Ninja Power Star is a special Ninja Power Star that bears the likeness of the Phantom Ranger and is marked with the kanji for "red". This star is exclusive to the Super Ninja Steel toyline.