Eri (エリ, Eri) is Gosei Pink (ゴセイピンク, Gosei Pinku) of the Goseigers. She is a Gosei Angel of the Skick Tribe.

Eri is 22 years old at the beginning of Gioseiger.[1] She is the second oldest member among the five main Goseigers.

When the Tower of Heaven was destroyed, she and the other Goseigers were trapped on Earth until they could find a way back. A childhood friend of Alata and fellow member of the Skick Tribe.

Eri appears with her team hosting the Super Sentai Versus Series Theater, a special event on TV Asahi during the run of Goseiger, airing an hour before. A compilation of thirteen Super Sentai crossover movies in half-hour parts. The movies had commentary at the beginning and end by the Goseiger about the teams and the storylines within the movies and along with that, they also talk about what's coming up on their show, they also cosplay as characters from previous series.

Eri cosplays as Miku Imamura (MegaPink), Saya (GingaPink), Matsuri Tatsumi (GoPink), Sae Taiga (GaoWhite), First Spear, Furabiijo, Mikoto Nakadai (AbareKiller), Houka Ozu (MagiPink), and Sakura Nishihori (Bouken Pink). Eri is notable for staying either pink or white in her designations, but is also notable for having the most villain cosplaying at two. (although Mikoto does eventually become a hero, AbareKiller at the time of Bakuryuu Sentai Abaranger vs. Hurricaneger was purely a villain) Mikoto is also her only male identity. The only equivalents she did not portray were KuwagaRaiger (due to playing a Jakanja spear) and DekaPink (due to portraying Magiranger while the males portrayed Dekaranger)

Just a few weeks after Brajira's defeat, Eri unexpectedly is forced to face the sudden arrival of the Space Empire Zangyack on Earth, who rendered her and the rest of the Goseigers helpless. After the arrival of Akarenger and Big One, she fought alongside not only her own team, but every single Sentai ranger in existance, against the Zangyack when it attacked the Earth in the Great Legend War. After fighting against hundreds of Gormin and their Zgormin commanders. AkaRanger noticed the fleet moving towards them, he gathered all the rangers together and gave them the order to sacrifice their powers to wipe out the first invasion's armada. After losing her powers, Eri and the other Goseigers agreed that it was nice to lose their powers if it meant saving the world from the space invasion.

After the defeat of Ackdos Gill, Captain Marvelous returned all the Ranger Keys to the former Sentai heroes. Eri and her teammates have their powers again.

Eri, alongside her five-man team, among the majority of the Super Sentai heroes, was caught up in the "Super Hero Taisen" incident. The Goseigers attempted to fight the monsters of Dai-Shocker

as he was apparently hunting down the Sentai teams. When Tsukasa and Marvelous' ruse was revealed, the Goseigers appeared with the other Super Sentai through the dimensional wall

, with the boys lending their Reflect-type Gosei Cards to Decade as well as Kamen Riders Ryuki

to defend against him. This allowed an opening for the Riders to defeat him, revealing him to be Narutaki

Gosei Pink appeared with her team among the first 38 Super Sentai whom collectively empowered Wild Tousai Shuriken King in its fight against the titanic Gillmarda, granting the Ninningers and Zyuohgers the power to perform the Zyuoh Ninnin Super Sentai Burst which destroyed Gillmarda with the combined power of all 40 Super Sentai.

Eri joined the Super Sentai Strongest Battle as a member of Pink Warrior Team, where she fought against Go-On Blue of the Gunman Team and ultimately lost the match and the competition for her team.

She is a very optimistic person and is always positive about life. She is the maternal figure of the group. Eri's personality resembles that of a cheerful and bubbly girl, as she is always thinking positively and never gives up. She also lacks common sense, as shown when collaborating with Moune. Her capricious and airheaded personality also causes Eri to clash with Moune and her other teammates.

As Gosei Pink, she has a Phoenix motif. She pilots the Gosei Phoenix. Gosei Pink's main weapon is a laser gun called the Skick Shot, which resembles a shield. As a member of the Skick Tribe, Gosei Pink can use Gosei Cards of that tribe with her Tensouder.

Pink Trick: An attack where she does a multi shot attack

The Gosei Pink Ranger Key (ゴセイピンクレンジャーキー, Gosei Pinku Renjā Kī) is Eri's personal Ranger Key and what became of her powers after he along with the rest of the 34 Super Sentai sacrificed their powers to end the Great Legend War.

This key along with the majority of the Ranger Keys were collected by the Red Pirates and later used by the Gokaigers. The Gosei Pink Ranger Key was mainly used by Ahim de Famille (Gokai Pink), who used it to fight as Gosei Pink.

After Zangyack were finally defeated, the Gokaigers gave the Ranger Keys back to their rightful owners. It is presumed that Eri received her key and became Gosei Pink once more. 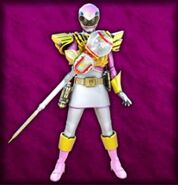 Gosei Pink is among the vast pantheon of Rangers which are available in the mobile game Super Sentai Battle Base, with her Super Goseiger form being available as well.

Gosei Pink appears with her team among all Sentai in the mobile game Super Sentai Legend Wars.