Final Ep.: The Will of the Earth

"I will remake this planet. This planet...will be remade."
―Eras's first words spoken through Kleon upon her awakening.[src]

"No! Ohhhhhh! You dare strike at me...? You will pay! You leave me no choice... I must take your life."
―Eras after being shruken down by Koh and the Ryusoul Calibur.[src]
"To be destroyed by my own creations... I suppose that means... The planet no longer needs me."
―Eras' final words before her death.[src]

Eras (エラス, Erasu) was the leader of Warfare Tribe Druidon and the main antagonist of Kishiryu Sentai Ryusoulger. Unknown to most, she was the creator of not only the Druidon but also the Ryusoul Tribe.

A being of unknown origin, Eras created the first members of the Ryusoul Tribe over 65 million years ago to protect Earth. However, as time went on, the kinsman of the Ryusoul Tribe began warring with each other; engaging in battles that ravaged the land. Witnessing the destruction that her creations had caused, Eras sought to exterminate the Ryusoul Tribe with the creation of the Druidon Tribe. But, much to Era's dismay, her new creation began their own campaign for the conquest of Earth; another failure that inspired Eras to begin orchestrating the destruction of both tribes. In the ancient past, the ancestral Ryusoul Tribesmen battled Eras and sealed her within the Ryusoul Calibur which was entombed under the Temple of the Beginning.

Despite being sealed, Eras drains the power from the Ryusoul Calibur for millions of years which eventually garners enough power to break free once the Ryusoulgers of present day unearth the sword and disrupt the seal placed upon her.

After she awakens, Eras begins to create three new Druidon Generals; Yabasword and the Gunjoji brothers.

When the battle between the Ryusoulgers and the Druidon escalates, she makes Yabasword go berserk and attack both sides.

After Yabasword is destroyed by Pricious, the Ryusolgers soundly defeat Pricious who proclaims that he will kill them as is Eras' will. At this point, she reveals the shocking truth about the two tribe's origins to him much to his horror. When Wiserue reappears and tries to reconcile with Pricious, Eras decides that it is time to act so she creates a tendril that pierces through both Kleon and Pricious. Although Kleon is unharmed by the attack, the tendril drags Pricious in and Eras absorbs him. Eras's new body forms and she unleashes a blinding light that engulfs the Ryusoulgers.

The light puts all people on Earth, except the Druidons, into an eternal sleep with peaceful and happy dreams. While she is engaged by King KishiRyuOh, Kleon is able to wake the Ryusoulgers up. After using tendrils to capture all humans in the city, she fires an energy beam that turns it into a wasteland but King KishiRyuOh shields Kleon and the Ryusoulgers from the attack. Eras then releases more tendrils to attack the Ryusoulgers and successfully captures Melto, Asuna and Kleon, absorbing them into her body whilst the other Ryusoulgers retreat. Wiserue discovers that she plans to use the life-force of the captured humans to rejuvenate the barren Earth. On the next day, the captured trio are able to burst out of her chest by creating a Satan Minosaur. After eliminating the newly born Minosaur, Eras engages the transformed Ryusoulgers and quickly knocks them out of transformation. She then tries to convince them that what she is doing is good for everyone and for the planet but, when they make up their minds and confront her, she decides that they aren't needed in the new world as the final battle begins.

TV STORY-Ep. 47: Between Happiness and Despair

Engaging the Kishiryu mecha, Eras easily overwhelms and knocks them into their Kishiryu components. Eras is then stabbed in the chest by Koh using an enlarged Ryusoul Calibur which absorbs all of the Kishiryu. She is shrunken to human size as the Ryusoul Calibur breaks. Wounded and worn out, the Ryusolgers prepare for morph but their RyuSouls are burnt out so Eras uses a tendril to pierce and absorb Koh’s life-force to rejuvenate herself. As the Ryusoulgers are distressed with Koh's death, Eras decides to take her leave but they stop her and are repowered by their Kishiryu. In a lightless spirit world, Eras, in her core form, has a conversation with Koh's soul while her physical body fights the Ryusoulgers. Remembering how she created the Ryusoul Tribe but they had brought harm to her planet, she calls the Ryusoulgers fools and states she won't make the same mistake again. However, she becomes hesitant when Koh claims that the foolish mortals can learn from their mistakes and pass them on to the next generations which allows him comrades to fatally impale Eras with their Ryusoul Caliburs. Mortally wounded, a forlorn Eras wonders if that means that the planet doesn't need her anymore before dissolving into nothingness.

TV STORY-Final Ep.: The Will of the Earth

Although Koh was seemingly lost with Eras' death, the Kishiryu managed to rescue him and he survived as did Pricious who was soon found by Kleon and Wiserue.

Eras was once a kind and altruistic sentient being whom sought out peace. Over the course of time, however, her kind altruism converted to a passionate dogmatic extremism as she witnessed her creations the Ryusoul Tribe, who were supposed to uphold said peace, become maligned and warmongering entities, and the Druidon Tribe, who were created to exterminate the Ryusoul Tribe, seeking world domination. By Ryusoulger, she had grown disappointed at both sides contaminating her latest project and took it upon herself to remake it to her standards by sterilizing her experiment; converting the life force of its inhabitants to restore the damaged planet and start over. Despite this, she was not evil and her motives were altruistic as she believed that she was doing what the Earth needed despite how twisted her methods were.f 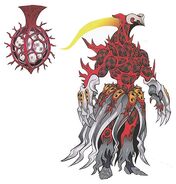