Little Spy Tactics (スパイ小作戦, Supai Shōsakusen) is the eighth episode of Kaizoku Sentai Gokaiger. It acts as a pseudo-tribute to Battle Fever J.

The Zangyack Empire sends the Sneak Brothers to spy on the Gokaigers.

After MagiGokaiOh finishes off the Sugormin sent to Earth, Warz Gill snaps and takes out his frustration on his subordinates before he and Barizorg leave to find an Action Commander for the next invasion. But more concerned of the Gokaigers' ability to use the powers of the Super Sentai, with Insarn giving him review on the GokaiGalleon crew save Don, whom is of no concern, Damaras sends the Sneak Brothers - Elder and Younger - to learn more of their enemies' goals while keeping Warz in the dark of their activities. After multiple failures, Elder manages to stow away on the Gokai Galleon and overhears the crew talking about the Greatest Treasure before being forced into a series of madcap attempts to hide when the crew notices Navi is missing and they go searching for him.

After searching the ship from top to bottom, the crew pins the blame on Don for Navi's disappearance before the robot parrot returns from the beach. After the crew ties him up for worrying them, Navi proceeds to give them their next clue: an island in the sky. Elder then reveals himself to the crew and gloats how knowing their intentions as Joe silently uses a baseball bat to swat him out of the ship. Younger frets over his brother's well-being as the crew descends to take out the Gormin Soldiers with the powers of the Gaorangers and the Denzimen. The Gokaigers then use the Goggle V Keys to tie up Younger and toss him around before finishing both brothers with their Gokai Sabres' Final Wave.

Enlarged by Insarn, the Sneak Brothers face GokaiOh. However, Elder is batted away to oblivion with the Gokai Bat as Younger attempts to avenge his big brother before being destroyed by Deka GokaiOh. Though Insarn fumes over the loss of her favorite minions, Damaras knows the GokaiGalleon crew's goal as the pirates proceed to sail off to find the island before the Zangyack do. 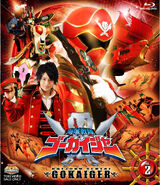