Crimson Special Attack!! Kirenger Dies at Sunset (真赤な特攻!! キレンジャー夕陽に死す, Makka na Tokkō!! Ki Renjā Sekiyō ni Shisu) is the sixty-seventh episode of Himitsu Sentai Gorenger. It features the death of Daigoro Kumano, the second Kirenger, marking the first time a Ranger dies in the line of duty. It also features the return of Baku Hatakeyama as Daita Oiwa, the original Kirenger who will remain with the team for the remainder of the series.

This episode is also notable as the first episode where the Japan Action Club performs the stunts and suitwork, becoming the main suit actors of Super Sentai from this point forwards. The introduction of the J.A.C. likewise introduces several new suit actors who will make their names within the Super Sentai franchise from this point forwards, including Kenji Ohba, Jun'ichi Haruta, Yoshinori Okamoto and Jun Murakami.

When Kumano makes a mistake that leads to the Black Cross acquiring a powerful weapon, he decides to take matters into his own hands, no matter what the cost. 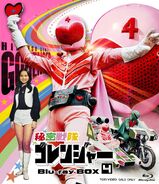 Gorenger Blu-ray Volume 4
Add a photo to this gallery

Retrieved from "https://powerrangers.fandom.com/wiki/Ep._67:_Crimson_Special_Attack!!_Kirenger_Dies_at_Sunset?oldid=823470"
Community content is available under CC-BY-SA unless otherwise noted.