Kenji becomes obsessed in taking revenge on Poison Gas Mask, even as the Black Cross general tries to make himself an immortal warrior.

An EAGLE convoy is suddenly attacked by Poison Gas Mask and an army of Black Cross Zoldiers who have come to steal the materials that are being transported for a factory that the BCA is planning to build. Arriving to late to save the soldiers are Tsuyoshi Kaijo and Kenji Asuka, who vow to avenge their deaths. The pair rides after the stolen trucks on their Red and Green Machines and are quickly spotted by the Poison Gas Mask, who manages to make the trucks vanish while driving through a tunnel. As the two Gorangers try to figure out how the Black Cross soldiers managed to pull this vanishing act, Poison Gas Mask ambushes them from above the tunnel. Quickly transforming, Akaranger and Midoranger to face their foe. While Aka restrains Poison Gas Mask with his Red Bute, Mido attempts to strike him with his Midomerang but Poison Gas Mask teleports away. Returning to the tunnel to search for clues, the pair are ambushed yet again by Poison Gas Mask who toys with them before teleporting away again, vowing that he will see the two Gorangers again. Soon the trucks arrive at a secret Black Cross facility were Poison Gas Mask undergoes surgery to have an immortality circuit implanted in his body making him invincible. The villain is eager for the operation to be completed so he can finally destroy the Gorangers.

By this time, Tusyoshi and Kenji have returned to Goranger headquarters where the whole team is briefed by Commander Edogawa on the Black Cross Army's latest scheme. He informs the team that the BCA is building a factory to manufacture a deadly gas. Injured in his battle with Poison Gas Mask, Kenji insists on getting revenge on their foe and must be reminded by Edogawa that the Gorangers do not seek revenge and that their main goal is to save lives.

Later, Poison Gas Mask appears in the city and openly attacks a police car forcing the officer to defend himself. The officer's bullets have no effect on Poison Gas Mask who then slays the officer. With the installation of the immortality circuit a complete success, Poison Gas Mask calls out for the Gorangers to face him. When word reaches the Gorangers, Edogawa once again orders Kenji to stand down, assuring him that he has operatives trying to locate the secret factory. Agents 008 and 009 are following Poison Gas Mask as searches the city for the Gorangers in disguise. Unfortunately, when their quarry disappears the two spies split up. Once alone, Agent 008 is captured by Poison Gas Mask, who takes her to a nearby parking garage demands to know the location of the Goranger's secret base. When Agent 008 refuses to talk, he and some Zoldiers try to rough her up but they retreat when Agent 009 arrives on the scene.

As luck would have it, Poison Gas Mask wanders into Snack Gon where Taro Katou and his sister Yoko wait for the other regulars to show up as Taro has more riddles to try and stump them with. Acting natural, Yoko takes Poison Gas Mask's order and gives Edogawa a nod of warning before trying to rush Taro off to safety. However, the boy doesn't want to leave without someone solving his new riddle ("It sucks gas fully into its face, floating in the big sky. What do you call such a monster?") and asks the stranger who correctly answers that the boy is talking about an air balloon. Growing impatient, Poison Gas Mask then approaches the counter and shows Edogawa a photo of Tusyoshi. Although Edogawa plays dumb, Taro almost blows their cover by asking to look at the pictures, but his sister quickly distracts him with a riddle of her own. Considering this yet another dead end, Poison Gas Mask storms out of the restaurant to continue his search elsewhere. Rushing to the Goranger's secret hideout, Edogawa tells the Gorangers about his encounter with Poison Gas Mask. After identifying him with the security monitors, Kenji storms out to face Poison Gas Mask alone.

Stalking his enemy, Kenji eventually loses sight of him allowing Poison Gas Mask time to remove his disguise and ambush the Goranger from above. Wanting revenge against Poison Gas Mask for wiping out his entire regiment, Kenji challenges Poison Gas Mask to a battle before changing into the Midoranger. The pair battle in a nearby park where Poison Gas Mask easily teleports out of the way of Midoranger's attacks and eventually incapacitates the hero with a gas-filled missile. However, instead of killing Midoranger, Poison Gas Mask takes him prisoner. Back at the Black Cross Army factory, Poison Gas Mask tortures his prisoner in order to force him to call his teammates. Despite being whipped and electrocuted, Midoranger refuses to comply. However, the villain is soon called away to have a replacement immortality circuit installed to replace the old one. The operation is a success and Poison Gas Mask is told by the scientists that this latest installation will not need any replacements. By this time, Midoranger agrees to call his comrades for help and Poison Gas Mask orders him to tell the other Gorangers to come to Sulfer Valley and nothing else. When given his wrist communicator, Midoranger tries to also tell his teammates the exact location of the gas factory and how they are going to use the gas pressure from below the Earth's surface to carry out their plan before he is cut off.

Hearing all of this, the rest of the Gorangers board Variblune and fly to Sulfer Valley. On the ground, they emerge from their ship on their motorcycles. Alerted to their arrival, Poison Gas Mask has Midoranger tied to a cross outside of their cave. Noticing gas surrounding their comrade, Akaranger has Kiranger scan it to confirm that it is safe before proceeding. Checking Midoranger's body they find no heartbeat. Quickly, the four Gorangers revive their comrade with a Goranger Charge. Revived, Midoranger breaks free from his bonds and leads the rest of the Gorangers to the entrance to the factory. There they are confronted by Poison Gas Mask and an army of Zoldiers. While the others fight off the Zoldiers, Kiranger manages to reach Poison Gas Mask and knocked down. When the rest of the team rushes to Kiranger's side, Poison Gas Mask orders the scientist inside to unleash the gas. The villain explains that they have developed a way of turn natural gas into poison and release it into the atmosphere. The Gorangers attempt to attack their foe but he easily teleports out of the way of all of their attacks.

When Poison Gas Mask boasts about his immortality, Midoranger remembers that the scientist installed the immortality circuit into his head. Leaping around his enemy, the Midoranger manages to get behind Poison Gas Mask and strikes him in the back of the head with his Midomerang, damaging the circuit. As Poison Gas Mask tries to flee, the Gorangers launch the Goranger Storm, destroying their foe. Watching this from his hideout, the Black Cross Fuhrer orders his minions to lure the Gorangers into the factory and blow it up. Inside the facility, the Gorangers discover the timebomb but are too late to stop it from going off. As the factory begins going down around them, the Gorangers gather up the workers still inside and carry them to the safety of Variblune just as the factory explodes. Back at base, the Gorangers celebrate their victory even though they came close to losing. They are soon joined by Commander Edogawa enters the room and reminds the team -- particularly Kenji -- that the only way the Gorangers can be victorious is that they always work as a team. The team then has a good laugh when Daita has the audacity to ask Edogawa to deliver curry to him like he did earlier prompting Akira to remind their commander to watch his blood pressure. 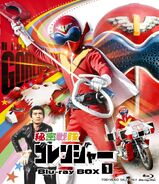 Retrieved from "https://powerrangers.fandom.com/wiki/Ep._5:_Green_Anger,_Immortal_Gas-Person?oldid=840379"
Community content is available under CC-BY-SA unless otherwise noted.