The Strongest Fighting Machine (最強の決戦機, Saikyō no Kessenki) is the thirty-seventh episode of Kaizoku Sentai Gokaiger. It is also the first part of a two-part showdown with Warz Gill and Barizorg, which concludes with The Power to Seize Dreams.

Warz Gill's father sends him the Great Waruzu robot for him to take out the Gokaigers, while Joe and Barizorg confront each other, once more. Meanwhile, Gai asks Marvelous what it means to "protect."

After the Gokaigers defeat another wave of Zugormin with Machalcon's help, the Engine asks the Gokaigers if they also have their own greater power just like the other Super Sentai, but the pirates are unable to give an answer as they have never thought about it. Meanwhile, Warz Gill's father sends two members of his royal guard, the Dogormin to deliver the Great Warz robot, Zangyack's strongest fighting machine, for him to take out the Gokaigers once and for all. Damarasu protests when Warz Gill insists that he himself will lead the attack and the prince reveals to him that he overheard his conversation with the Emperor, who appointed Damarasu as his second in command for the Earth Invasion Force to ensure its success regardless of his ineptitude as a leader. Decided to make use of this opportunity to prove himself to his father, Warz Gill sends Barizorg in advance to confront the pirates. Joe decides to face Barizorg by himself and the rest of the team agrees to cover up for him. While the regular Gormin are easily wiped out by the pirates, the Dogormin prove themselves as tougher opponents and the team makes use of some Extra Hero Keys to drive them out. Barizorg and Joe's match reach a stalemate when Warz Gill makes his entrance and boards the Great Warz to join the fight. The Gokaigers board their robots and summon Machalcon to aid them, but they are easily defeated by the Great Warz. Despite combining the Gokaioh and GoZyuJin into the GoZyu GokaiOh, the Gokaigers find that the enemy robot is more than they can handle and Captain Marvelous, remembering when AkaRed sacrificed himself to ensure his escape, forcibly ejects his crew to safety, determined to protect them at the cost of his life. The other Gokaigers are forced to witness GoZyu GokaiOh being defeated and the Gokai Galleon thrown out into deep space. Captain Marvelous is seen inside the cockpit, lying injured and unconscious on the floor. 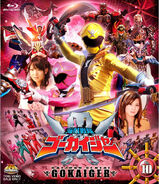 Gokaiger Volume 10, Blu-ray cover
Add a photo to this gallery

Retrieved from "https://powerrangers.fandom.com/wiki/Ep._37:_The_Strongest_Fighting_Machine?oldid=473558"
Community content is available under CC-BY-SA unless otherwise noted.