Partner Pirate (相棒カイゾク, Aibō Kaizoku) is the thirty-sixth episode of Kaizoku Sentai Gokaiger. It is also the second part of a two-part tribute to Engine Sentai Go-Onger, which began with Dimension on the Other Side.

The Gokaigers defeated Chirakashizky in order to stop Gaiark's attack on the Gunman World, but end up falling into one of their traps! Turns out that another Gaiark member is attempting to take over Human World! But having saved Gunman World, they now find out that the dimensional door to back to Human World has closed!

Sosuke and the Gokaigers head to the Engines home world, "Machine World" where they attempt to get help from a new Engine, Machalcon, and return to Human World but....! Will the new Engine join up with the Gokaigers? Will Go-Onger's Grand Power be unleashed?!

After trapping the Gokaigers and Sosuke in Gunman World, Babatcheed proceeds to begin his attack on the Human World. However, this attracts the Zangyack's attention with Warz coming to Earth with Insarn and Barizorg in what becomes an all-out among the villains. Back in Gunman World, after the Engines are unable to break the Isolation Barrier around the Human World in their shrunken state, Doc suggests they go to Machine World to get Machalcon's help.

Once back in their Braneworld in the middle of the villains' fight, the Gokaigers take both evil groups on as Warz falls back so the pirates and the Gaiark can kill each other. Using the Go-Onger Keys, the Gokaigers defeat the grunts before overwhelming Babatcheed and then using the Gokai Galleon Buster to defeat him. After performing Industrial Revolution, Babatcheed battles GokaiOh and GoZyuJin before Sosuke tells the Gokaigers to use his team's greater power as they formed a partnership with Machalcon. Summoned, Machalcon combines with GokaiOh to form Go-On GokaiOh who scraps Babatcheed. Soon after, as Machalcon returns to Machine World, Sosuke is impressed with the Gokai Galleon crew as he asks if he can join their crew as well. 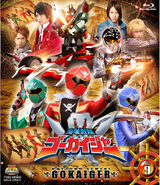 Gokaiger Volume 9, Blu-ray cover
Add a photo to this gallery

Retrieved from "https://powerrangers.fandom.com/wiki/Ep._36:_Partner_Pirate?oldid=852236"
Community content is available under CC-BY-SA unless otherwise noted.