Just a Lone Friend's Soul (友の魂だけでも, Tomo no Tamashii Dake Demo) is the thirtieth episode of Kaizoku Sentai Gokaiger. It is the tribute episode to Choujuu Sentai Liveman.

When the next fortune from Navi refers to a "skateboarding lion", Gai realizes it must mean Choujuu Sentai Liveman's Yellow Lion, Joh, while Zangyack scientist Zaien begins his attempt to mass-produce soldiers like Barizorg.

When the next fortune from Navi refers to a "skateboarding lion", Gai realizes it must mean Yellow Lion of the Livemen. However, as Gai has no idea where he is, the rest of the Gokai Galleon crew decide to go out and find him. As the others have no luck, Joe and Ahim meet Joh Ohara as he and Joe save an infant. Soon after, the two pirates and Joh find a Zangyack scientist named Zaien who attempts to kidnap a boxer. Transforming in front of him, the two Gokaigers battle the Gormin while Joh gets the boxer to safety before fighting the Gormin. Using the Denziman Keys, the Gokaigers drive Zaien off. The two then find a scanner which Joh learns that it is a technical specification on turning people into beings like Barizorg. After learning the contents of the file, Joe asks Joh to find a way to reverse the process. Accepting to help him, Joh takes Joe to his laboratory to find the means, only to find that the process can not be undone. With this knowledge, Joe laments that he cannot save his friend, as Joh eases his pain by telling of his own tribulations of fighting his own friends and how he intends not to let history repeat itself. As Joe leaves with renewed conviction, he realizes that Joh is the Livemen's Yellow Lion. Meanwhile, after learning Zaien's scheme to convert physically fit humans into beings like Barizorg, the Gokaigers track Zaien down and free his captives before they are joined by Joe. Vowing not to allow others to suffer Sid's fate, Joe transforms into Gokai Blue. As Gokai Silver assumes Gold Mode to take out the Zugormin, the Gokaigers assume the forms of the Livemen to fight Zaien. With Zaien weakened, Gokai Blue personally finishes the scientist off with Sid's trademark attack. Enlarged by a content Insarn, Zaien and the Zugormin battle GokaiOh and GoZyuRex. Using the greater power of the Livemen, GokaiOh summons Super Live Robo who takes out the Zugormin so Zaien can be destroyed by a Gokai Fūrai Attack/GoZyu Triple Drill Dream combo. Later, Joe vows to defeat Barizorg as he believes it is the only way to save Sid.

Liveman
Add a photo to this gallery 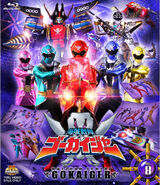 Gokaiger Volume 8, Blu-ray cover
Add a photo to this gallery

Retrieved from "https://powerrangers.fandom.com/wiki/Ep._30:_Just_a_Lone_Friend%27s_Soul?oldid=852231"
Community content is available under CC-BY-SA unless otherwise noted.