Wings are Eternal (翼は永遠に, Tsubasa wa Eien ni) is the twenty-eighth episode of Kaizoku Sentai Gokaiger. It is a tribute episode to Choujin Sentai Jetman.

An Action Commander by the name of Kiaido shows up to try and collect the bounty on the Gokaigers as they begin their search for the Jetman. Marvelous gets beaten by Kiaido and in his retreat runs across a strange man called Gai, otherwise known as a former member of the Jetman.

After taking out Zugormin with Hurricane GokaiOh and GoZyuJin, the Gokai Galleon crew were about to have a meal when they are confronted by the legendary bounty hunter Kiaido whom Captain Marvelous had a near-death encounter in the past. Though he changed since then, Gokai Red is unable to overcome Kiaido even when he and his crew assume the forms of the Biomen and the Maskmen.

Disgusted with fighting weaker opponents, Kiaido allows the Gokai Galleon crew to leave, to Captain Marvelous' dismay. While pondering, Navi reveals in a treasure navigation that Kiaido can be defeated with a phoenix, with Gai realizing it must refer to the Jetmen. However, while telling Luka and Doc of their captain's strange behavior as of late, Joe's search takes a strange turn when a man on a motorcycle steals his Mobirate while hitting on Luka. The same man appears before Captain Marvelous, questioning his abilities as a leader before taking his Mobirate as well. Telling the pirates not to look for the Jetmen, the man introduces himself as Gai Yuki.

After Gai informs them that he is the missing Black Condor, Marvelous later runs into Yuki as he tells the pirate that his lack of courage and stubborn pride are what will keep himself from getting the Jetmen's Greater Power. Following the man, Marvelous finds the tombstone of Gai Yuki as the crew are stunned and Gai realizes that Yuki does not want the other Jetmen involved with Kiaido. Confronting Kiaido, Gai overpowers the Gormin before finishing them off as Black Condor. Seeing that Black Condor is intent to fight despite being dead, Captain Marvelous regains his courage as he and his crew take over.

Regaining his Mobirate, Gokai Red fights Kiaido before he and his crewmates assume the forms of the Jetmen to finish off the bounty hunter with a Jet Phoenix-style attack. Later, with Gai still unable to see him, Yuki gives the Gokaigers his blessings before departing back to Heaven's Golden Gate bar to resume playing cards with God, and after winning again, he accepts God's request to play a song on his saxophone. 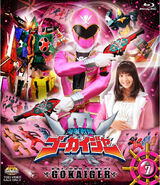