Ep. 1: The Space Pirates Appear (宇宙海賊現る, Uchū Kaizoku Arawaru), is the first episode of Kaizoku Sentai Gokaiger. This episode sets up the world of this season including the Gokaiger as well as the Great Legend War, an event where all 34 previous Sentai teams sacrificed their powers to stop the invasion of the Zangyack Empire prior to the start of the story.

A band of space pirates known as the Gokaiger arrive on Earth in pursuit of a legendary treasure tied to the 34 previous Sentai teams of the planet, who had all sacrificed their powers to stop the Zangyack Empire.

When the Space Empire Zangyack invades Earth, the 34 Super Sentai engage them in the Great Legend War before sacrificing their powers to destroy the armada. Some time after, the Gokai Galleon arrives to Earth with its crew of pirates after their navigation robot Navi confirms it to be where the Greatest Treasure in the Universe is buried. Though a small advance fleet of Zangyack ships are seen heading towards the planet, the Gokai Galleon's Captain Marvelous refuses to turn the ship around when they are close to the treasure. With that in mind, the Gokai Galleon fights through the fleet before forming Gokaioh to destroy them single handedly. After reaching the Earth, Captain Marvelous introduces himself and his crew to a group of humans as the Kaizoku Sentai Gokaiger and state their intentions to obtain the Treasure from them, only for no one to have knowledge of the treasure. As Captain Marvelous has his lookout Luka Millfy sell her ring off for cash to eat at the Snack Safari, the Zangyack flagship Gigant Horse arrives within Earth's atmosphere as an infuriated Commandant Warz Gill declares an all-out assault on the planet with the main invasion force.

Action Commander Shikabanen leads the Gormin Sailors to attack as the Gokai Galleon crew were about to eat. Though they attempt to stay out of the skirmish, the Gokai Galleon crew reconsiders due to their experience with the Zangyack conquering their planet long ago. Arriving to the aid of two women and several children, the crew transforms into the Gokaigers to battle the Zangyack forces. When the second wave arrives, the Gokaigers assume the forms of the Gorengers, Shinkengers and Magirangers to get rid of the Gormin. Transforming back, the Gokaigers use their Gokai Sabres' Final Wave attack to destroy Shikabanen. Soon after, now expecting retaliation from the Zangyack, the crew take their leave while being admired by the populace as heroes, though Captain Marvelous insists that they were not protecting them and only attacked the villains for ruining his lunch. 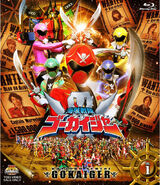