The Big Abare with the Dinosaur Robot Drill (恐竜ロボットドリルで大アバレ, Kyōryū Robotto Doriru de Ō Abare) is the eighteenth episode of Kaizoku Sentai Gokaiger. Although it has elements regarding three Sentai series (Kyōryū Sentai Zyuranger, Mirai Sentai Timeranger, and Bakuryuu Sentai Abaranger), it is not an official tribute to any of these series. It reveals the origin of Gokai Silver and the debut of his mecha made from the Greater Powers of the three aforementioned series, GoZyuDrill.

Gai tells the team on the Gokai Galleon how he got three Greater Powers from three particular Sentai heroes. Marvelous confiscates his powers, putting Gai to a test to show him something Marvelous cannot do.

Gai reveals to the Gokaigers that he became Gokai Silver after acquiring three Greater Powers. When he is invited aboard the Gokai Galleon, he explains that a few days ago, he was hit by a truck while saving a girl across a street. While he was in a coma at the hospital, he had a dream of meeting DragonRanger, TimeFire and AbareKiller - the latter changing into Mikoto Nakadai and handing Gai the Gokai Cellular and Gokai Silver key. Before the three warriors disappeared, Mikoto told him to become the greatest hero and that they entrust the powers of the Zyurangers, Timerangers and Abarangers to him; at that point, Gai woke up from his coma with the phone and key in his hand.

Despite the revelation, Gai has yet to figure out how to use the three powers. Because of this, Captain Marvelous confiscates the Gokai Cellular and GokaiSilver key from Gai, asking him to show him something he cannot do. Later, while thinking of an answer to Captain Marvelous' question, Gai responds to a Zangyack invasion led by Action Commander Osogain at a construction yard. Despite not being able to change into Gokai Silver, he fends off the Gormin Sailors with lumber, but is quickly outnumbered and beaten up before the Gokaigers intervene. Seeing his unrelenting courage and recklessness in battle, Captain Marvelous hands Gai his phone and key - officially making him a member of the crew.

After finishing off the Gormin Sailors, the six Gokaigers change into the Shinkengers (though Marvelous handed Gai the King Ranger Key first before giving him the Shinken Gold Key due to his vague request) and destroy the two Zugormin units with the Shinken Gokai Slash attack. The five main Gokaigers then change into different silver warriors to weaken Osogain before Gokai Silver destroys him with the Gokai Supernova. When Osogain is enlarged and joined by six giant Zugormin units, Gokai Silver uses the powers of the TimeFire, Dragon Ranger and AbareKiller keys to summon GoZyuJin and destroyed them in a most show-stopping way. Back aboard the Gokai Galleon, Captain Marvelous tells Gai that while he is part of the crew, he is a pirate apprentice - much to Gai's dismay. Despite this, he looks forward to working with the Gokaigers. Don, however, is not comfortable with Gai addressing him as "Don-san". 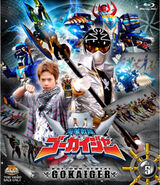