Clash! Sentai vs. Sentai (激突！戦隊VS戦隊, Gekitotsu! Sentai Bāsasu Sentai) is the sixteenth episode of Kaizoku Sentai Gokaiger. It is the second part of the two-part debut of Basco ta Jolokia, which began with Ep. 15: A Privateer Appears, as well as serving as a precursor to Gokaiger Goseiger Super Sentai 199 Hero Great Battle.

Captain Marvelous must figure out a way to save his crew members from Basco ta Jolokia without paying the ransom of all of the Ranger Keys.

After obtaining the five Ranger Keys he and his shipmates defeated, Captain Marvelous frantically makes attempts to locate the Free Joker aboard the Gokai Galleon, but to no avail. He then receives a phone call from Basco, who has his shipmates chained up while Sally wears their Mobirates on a necklace. Basco informs Captain Marvelous to surrender the Ranger Key chest, Navi, and the Gokai Galleon in exchange for the lives of his shipmates. Joe tells Basco that Captain Marvelous will never give up on his dream quest, but the privateer reminds him that in order to obtain something, one must give up something in return. He then orders Sally to take his prisoners to the holding cell. After Don drives Sally away by making monkey noises, Joe discovers a ventilation shaft in their cell and the Gokaigers make their escape attempt. They wind up in a storage room and are once again brought to their cell by Basco and Sally. Meanwhile, back aboard the Gokai Galleon, Captain Marvelous receives a flashback on his early days as a pirate. After raiding a Zangyack treasure depository, he discovered the AkaRenger key inside one of the crates. At that point, he met AkaRed - who recruited him into the Red Pirates. From there, Captain Marvelous regained his confidence and comes up with a plan of his own. He calls Basco to arrange an exchange meeting. The captain suddenly throws the treasure chest in the air, spilling all of the keys and a Mobirates in time for Don to catch it with his mouth while Joe catches the ShinkenGreen key and inserts it in the phone's key hole - transforming Don and enabling him to free his shipmates. Basco then unleashes his 10 Super Sentai warriors while the Gokaigers regroup to battle them while Navi places the Ranger Keys back into the chest and returns them to the Gokai Galleon. Each Gokaiger is initially outnumbered two-to-one, but they devise new strategies to corner the warriors and defeat them. The Gokaigers then use the Final Wave to finish off the five remaining warriors. This prompts Basco to unleash the Wateru Liquidroid from inside Sally to dispatch the Gokaigers before leaving the scene. Gokaioh is formed to battle the Liquidroid before summoning Gao Lion to form Shinken Gokaioh and finish it off with the Gokai Samurai Slash. Back aboard the Gokai Galleon, the Gokaigers look at the 15 newly-acquired Ranger Keys before Don prepares supper for the crew. Meanwhile, aboard the Free Joker, Basco reveals that he has ten more Ranger Keys in his hands. 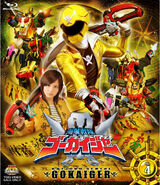